From my sister, Denise, who has installed this system at her own home in Pine Ridge, North Carolina: 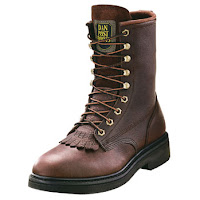 How to install a Home Security System in the South:
1. Go to a second-hand store and buy a pair of men's used size 14-16 work boots.
2. Place them on your front porch, along with a copy of "Guns & Ammo" Magazine.
3. Put a few giant dog dishes next to the boots and magazines.
4. Leave a note on your door that reads:

Big Jim, Duke, Slim and I went for more ammo. Back in an hour. Don't mess with the pit bulls--they attacked the mailman this morning and messed him up real bad. I don't think Killer took part in it but it was hard to tell from all the blood. Anyway, I locked all four of 'em in the house. Better wait outside.

Older Daughter Karen and I headed to Lawrence, Kansas, last night to Henry T's bar. We, along with a couple of hundred other KU fans, watched them win the national championship. It was awesome. Dan and Carol, of course, were in San Antonio in person, and if that was more exciting I could not have stood it. Lawrence went bezerk. After lots of high-fiving and screaming, we stepped into the parking lot, littered with beer cans and some guy who was holding onto a tailgate and putting his clothes back on. Apparently, he had just streaked around the building. Oh well, I'm always too late. . . . Rock Chalk, Jayhawk, KU!
________________________________________
Birthday


Now, dear reader, I'm off to celebrate my birthday by visiting the cemetery in Lincoln, Kansas. They tell me there is a tombstone shaped like a brief case--an ode to a traveling salesman. Yes, at 50, I can still live it up!
Posted by Deb Goodrich at 10:17 AM

Happy Birthday, Deb! And what a way to celebrate it!