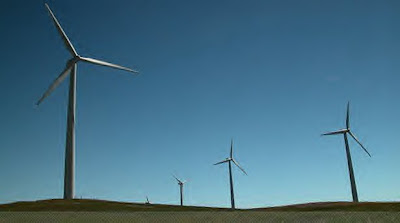 If the energy in Heritage Hall could have been harnessed, it would have powered Topeka for a year.
T. Boone Pickens conducted the first of his dozen, nation-wide, town hall meetings to an overflow crowd Wednesday afternoon. By 3:30 (the meeting was scheduled for 4), Expocenter security guards were not admitting anyone else inside the brimming building. Folks whined and protested. The gentleman who walked with me from the parking lot, an engineer who had driven all the way from Kansas City, slipped to the other side of the building and tried that door. I don't think he got inside because I didn't see him again. A group pleaded vainly that they had driven from Oklahoma. I was grateful for a press card.

An elderly man in front of me wore overalls and a Tractor Supply cap. A tee shirt proclaimed, "Convert Now," and I thought the man was a fundamentalist-Christian until I realized the illustration was not a steeple but a windmill. Across the aisle sat former Congressman and Senate hopeful, Jim Slattery. It was definitely a cross-section of Kansas: young, old; working class, affluent; men, women; politicians (scads of politicians), voters.
The man-of-the-hour strode in beside Governor Kathleen Sebelius and stepped right to the middle of the stage, announcing, "What a great crowd!" Governor Sebelius nonchalantly explained that Rep. Annie Kuether would introduce her and she, in turn, would introduce him. He retreated a step or so and gave her the floor.
The governor was witty and upbeat, and Pickens is obviously impressed with her, later stating that one of the reasons Topeka was chosen for the town hall meeting was the governor's commitment to wind power.

Pickens (right) is comfortable in front of a crowd. He is folksy, matter-of-fact, direct, determined. Often overheard from the crowd was the term, "common sense." He said he wanted to raise an army. The throng was so eager that they might have stormed the Bastille if he had asked them. Later, I asked if he thought people were there to learn about energy or to just listen to someone who shoots straight.
He looked me right in the eye and replied, "I'm not really sure."
When Slattery stood up and asked if Pickens supported electric cars, the oil baron replied, "I'm for anything American." On several occasions, he reiterated this position, constantly referring to the $700 billion spent annually on oil. Natural gas, coal, wind--he is open to anything that keeps the country moving and the dollars here.
The applause was loud and immediate. Slattery also mentioned that a couple of guys he knows are looking for a running mate. The applause was immediate for that one as well but Pickens didn't take the bait.
Scrawling on a dry-erase board, Pickens laid out his plan: In ten years America could reduce its dependence on foreign oil by 38%. That's pretty impressive, he concluded, and the crowd was in general agreement.
The question that was asked and re-asked, however, is what individuals should do NOW. People were serious. One gentleman commented that he had bought a smaller car and was saving $200 a month on gas. "Where do I invest that money to make this plan work?" he asked.
Boone said simply, "I'm not sure." He instructed the audience to visit the website, fill out the information cards for updates, and await further instructions. It had the feel of disciples waiting for the Mother Ship.

A Pickens staffer talked with the hundreds of folks listening outside and gleaned questions from them. They were the same. What do I do? It was a crowd hungry for direction.
"We have been leaderless on energy for 40 years," Pickens said. "I can't believe we've been this stupid. . . . The French have been four times smarter than us," a hard pill to swallow, he added.
I asked what took him so long to come up with a plan. He grinned. "I tried in the early 90s but we had cheap oil and nobody listened."
The most interesting energy question for me was T. Boone himself. What an incredibly energetic, youthful man. He stresses physical fitness, though he didn't touch on that topic today. He also believes in loving what you do. He didn't mention either of these ideals. They were obvious. And those qualities moved people.

To learn more, visit the pickensplan.com and listen to 1440kmaj.com for the recording of our visit. For that matter, be sure to tune in every weekday morning at 8 a.m. for Topeka Talks with yours truly.
Posted by Deb Goodrich at 10:58 PM