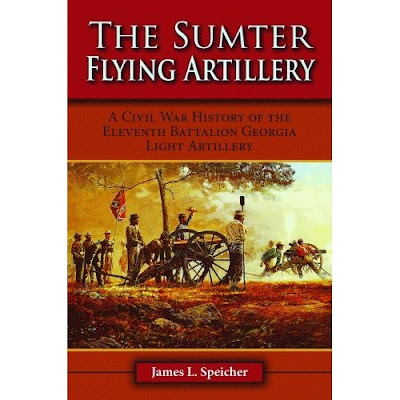 Whenever a new history book arrives in the mail it's like Christmas and I was sure celebrating when The Sumter Flying Artillery showed up Monday. Written by my bud, Jim "Spike" Speicher, this work chronicles his ancestor's unit during the War Between the States. President Jimmy Carter has a blurb on the jacket, and it turns out that his ancestor fought along with Spike's. The Prez allowed Spike to publish a poem he wrote upon finding his ancestor's war letters in the attic. It is beautiful, simply beautiful. So is the cover art by Dale Gallon. I've just started the book and will write more later, but I have to tell you, the photographs are priceless! Over the years, Spike has accumulated some incredible images of the men who served in this unit, as well as the stories that accompany them. Kudos! 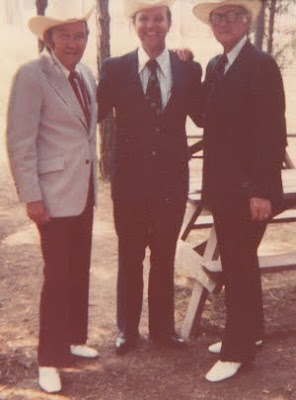 Last Sunday was "Harold Mitchell Appreciation Day" at the Fairview Ruritan Building, not too far from Galax, Virginia. Harold is an emcee/dj legend and one of the best guys ever (Harold, center, is pictured with two bluegrass legends, Lester Flatt and Bill Monroe). I so wish I could have been there but my sister, Denise, ably represented me to the friends present. Sherry Boyd (below, with dobroist Kenneth Berrier) emceed this event and I wish we could have a couple of days to catch up on old times from our days together at WPAQ.

For your edification, dear reader, I'm copying April Wright's interview with Harold which appeared in the Galax Gazette. Great job, April. I'm trying to locate an article I wrote on Harold many years ago. He grew up in Fries, Virginia, as did my Grandma Coalson, so he knew much of my family, including my Aunt Nancy Bobbitt and told me great stories of her.

When local DJ and emcee Harold Mitchell was bedridden with rheumatic fever at six years old, the radio kept him company as he listened to the legends on the Grand Ole Opry.

During the five-hour radio program, he would hear greats such as Hank Williams, Hank Snow, Kitty Wells and comedians and radio announcers. However, it was the harmonies of Bill Monroe's Bluegrass Boys that caught his ear, and that’s when he fell in love with bluegrass.

From then on, he knew one way or another he was going to be in the radio business.

“I knew that to be in the industry I would have to get to know all the bluegrass and country musicians,” said the 71-year-old.

And he proves he did, as he flips through a photo album filled with pictures of bluegrass originators and legends, such as Bill Monroe, Lester Flatt and Earl Scruggs. Mitchell has met everyone from Cousin Joe to Minnie Pearl.

“You see that chair?” he says as he walks into his house, pointing out an orange, tattered vintage recliner he plans to have reupholstered. “That’s where Bill Monroe used to sit when he visited.”

Mitchell began his emcee career at Fries High School in 1956, when he introduced Charlie Monroe and his Kentucky Partners. And when he got out of the army in 1964, he attended the Carolina School of Broadcasting and soon became a DJ at WHHV in Hillsville.

He made successful the Carroll-Grayson Hoedown show, broadcasting from the Fairview Ruritan Club every Saturday for 10 years, and introduced the idea of the Fries Fiddlers Convention in 1965. He traveled as emcee for Bill Monroe and Lester Flatt and has interviewed many great artists, his first being guitarist Wayne Henderson of Rugby.

“We didn’t have the country magazines like we do today,” said Mitchell. “So I kept up with what was going on in the business and told people about their favorite stars. I had a vast listening audience.”

Mitchell has been there from the beginning of bluegrass music, knows the pioneers that started it and is still in the middle of it, as he continues to emcee big events like the Galax Old Fiddlers’ Convention.

“Anybody and everybody in bluegrass knows Harold,” said longtime friend Mitchell Freeman, of Mount Airy, N.C., who is helping organize an appreciation day for Harold. “There’s not a person within 150 miles that doesn’t know who he is.” Freeman calls Mitchell his mentor.

In honor of his lifetime commitment to bluegrass music, Harold Mitchell Appreciation Day will be held Sunday, starting at 2 p.m., at Fairview Ruritan Club in Galax, featuring a day of music and stories. Bluegrass musicians appearing will be Big Country Bluegrass, Pathway, The Cana Ramblers, Sammy Shelor, Johnny and Jeanette Williams and more. The host emcee will be Sherry Bond. (Boyd)

Tickets are $10, with all proceeds going to Mitchell.

“The band didn’t want anything, and the Fairview Ruritan Club said Harold’s deserved this for a long time,” said Freeman, who has known Mitchell for 35 years. “This is something to do for him. He’s one of the most gracious, nicest DJs I’ve ever met.”

Mitchell, said Freeman, has gotten the names for several bluegrass bands out there through radio music play, booking shows and putting in a good word.

“He provides a lot of encouragement,” said Freeman. “He’s the type of fellow that you could call on him anytime and he’d be there for you. ‘When you want me to be there?’ he’d say.”

As an emcee, he makes people feel like they’re a part of the show. On the radio, his voice and personality are so distinct that listeners can enjoy for hours, Freeman described. That's what separates him from others.

“He can sell a bald-headed man a comb,” Freeman added. “He’s that smooth.”

He's so well-liked in the industry, Freeman explained, musicians send Mitchell a copy of their album before it even comes out.

At each show, Mitchell takes the stage wearing his suit, tie, a cowboy hat and cowboy boots. And that’s become his trademark over the years — since 1972.

When Mitchell traveled as emcee for Bill Monroe and Lester Flatt, Mitchell said, the bluegrass legends required neat dress. “You had to be first-class to work for them,” he noted.

Mitchell was the lead act. Freeman said they couldn’t start a show without him.

In fact, Freeman said, one night in 1976 at Franklin Elementary School in Mount Airy, N.C., Mitchell was scheduled to emcee the bluegrass show. At about 10 minutes before time to go on, Freeman explained, Mitchell went into a classroom to dress in his suit, tie and hat — and locked himself in.

He was stuck in the dressing room for about 30 minutes.

“We didn’t want to start the show without him,” said Freeman. “'Don’t worry. We’ll get you out,’” he remembers telling Mitchell.

Freeman used his pickup truck, propped a ladder against the building and told him to climb out the window.

Freeman found the janitor and the show started about 20 minutes late. It was a close call, but Freeman was determined not to start the show without him.

“The show must go on,” Mitchell said, as he walked out of the classroom.

Mitchell is retired, but continues to emcee festivals, concerts and conventions. He is the longest running emcee for the Old Fiddlers' Convention, he noted.

The musicians, he said, have shaped his life and have put him where he is today.

“I loved running the show, working with the great stars,” he said. “I made a million friends along the way.”

Freeman said Mitchell teared up when he notified him of his special day.

“There are awards shows all over the nation, but I’d rather have this one here because this is by local people for a local man,” Mitchell said. “I’m surprised all of these people are going through all this for me.” 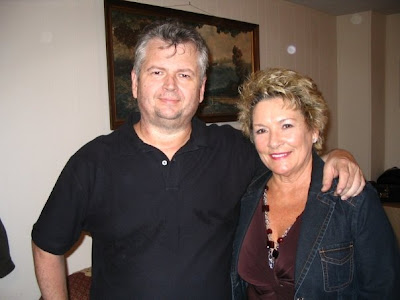