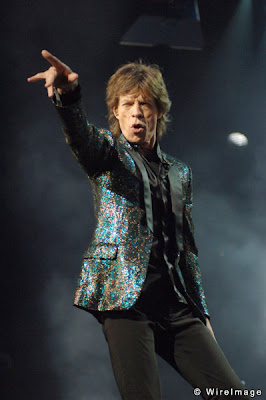 If Ned Kelley doesn't ring a bell, except for your strange cousin, try to recall your history of the West--the Australian West. Ned Kelley has been called the Australian Jesse James or Billy the Kid. Mick Jagger (right) played him in the movie. (Poor Ned. He probably saw Jagger's face and spun and spun in his grave til his bones were flung to the ends of the earth. As you can see from this image, Ned (below, left) was exponentially better looking than the Rolling Stone who portrayed him.)

According to the Guardian Limited, authorities in Melbourne revealed that the remains of Australia's most notorious outlaw are nowhere to be found. Executed over 120 years ago, Kelley's body was tossed into a mass grave at a prison.
Archaeologist Jeremy Smith of the conservation organization Heritage Victoria told the press that Ned's remains would have been among those of prisoners transferred from the Old Melbourne Gaol to Pentridge prison in the 1920s.

"Although his skull was souvenired, his bones would have been just put in a sack in a disordered and deteriorated condition," he said. "We think there would have been about 32 bodies in a mass grave and probably all of them have been lost."

He and his team have been charged with clearing the old prison site, which is due for re-development. Mr Smith said he would extend the archaeological dig in the hope of finding the outlaw's remains but it was likely that they had been dumped in a nearby quarry.

Souvenir Skull? Dumped in a quarry? I for one am encouraged that Australians have no more respect for the dead than their American cousins!

Kelly's exploits have inspired films, television programs, songs and books. The Guardian said his place in Australian history has raged for decades, with opinion divided over whether he was a reckless killer or a young man driven to crime because of poverty and social injustice. (Does this sound familiar to our Jesse James fans? If not already, it will remind you of William Clark Quantrill as well. Read on.)
The article continues:
Born in Beveridge, Victoria, Kelly and his family lived in poverty and his first clash with police was at the age of 14. He was proclaimed an outlaw some years later after he and his gang were involved in a shoot-out at Stringybark Creek, which left three policemen dead. While on the run, he carried out two bank raids. In the second, he and his gang broke into a police station in the town of Jerilderie, imprisoned the officers in their own cells, changed into their uniforms and posed as reinforcements from Sydney. The gang took over the town for several days, raided the bank and burned mortgage deeds.
Prior to arriving in the town, he dictated the Jerilderie letter, a manifesto of about 8,000 words in which he tried to justify his activities, expressing his antagonism against the police and his sense of injustice about the way he and his family were treated because they were Irish Catholics. He intended the letter to be published as a pamphlet but it was kept and used against him during his trial.
Kelly was finally trapped in an ambush on June 28, 1880. He came out dressed in home-made armour, made of metal plate, and walked towards the police firing furiously. He was shot in the legs, arms and groin multiple times before being arrested, while the rest of his gang was killed. He was sent for trial, sentenced to death and hanged. Two newspapers reported his last words as a weary: "Such is life."
Edward "Ned" Kelly was born in June 1855; the exact date is unknown. The son of Irish parents, he was the eldest of eight. As a boy he risked his life to save a drowning boy. He was given a green sash as a mark of gratitude by the boy's family and was wearing it under his armour during the shootout with police that ended his time on the run. He and his family lived in abject poverty and were described as wild and rowdy. They were accused of crimes including cattle theft but Kelly said they were victimised for being Irish Catholics. He was hanged on November 11, 1880. Kelly has been played in films by Mick Jagger (1970) and Heath Ledger (2003). Peter Carey won a Booker prize for his novel True History of the Kelly Gang.
"Once again Ned Kelly has authorities scratching their heads," noted the Melbourne Herald Sun newspaper gleefully.
When they find his bones, I'm sending flowers.
____________________________ 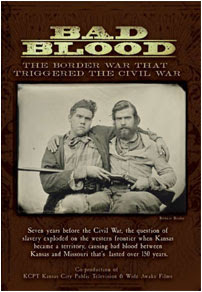 Media
From our buds at Wideawake Films, Bad Blood: The Border War that Triggered the Civil War is now available on DVD. Tom wrote the book on the border war (See War to the Knife at the top of this page) and he thinks this is one of the best documentaries he's ever seen; I heartily concur. Visit their site to order: http://www.civilwargoods.com/displayFileInfo.asp?product_id=12
________________________________
Email
Good Morning You Pretty "Southern Belle"! (note to readers: I'll be sure and poste your email if you use this salutation) 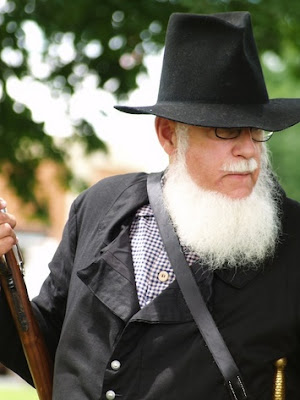 Brown is one of my favorite impressions & will travel for food & gas as an employee of the KSHS doing this impression & others. Also am working up an impression of "Charles Hamilton" as a counter point to Brown. I do not do Jim Lane, but also do Capt. James Montgomery.

Your blog is great & You are doing a GREAT JOB with the "Round Table," Take Care, Keep Safe &amp; Keep Tom in Line & Alive!
Arnold
DG: Arnold, Thank Goodness you're no longer one of Jennison's Jayhawkers!! Visit Arnold at Mine Creek Battlefield SHS at Pleasanton, Kansas, or at minecreek@kshs.org.
Posted by Deb Goodrich at 3:49 PM