The rain keeps falling. Cross Creek and Soldier Creek up north of Topeka are probably spilling over their banks as we speak, but that's not newsworthy. It seems every time a raindrop falls they flood. And now that we have trashed our basement carpet, gotten the dehumidifier going, and treated all the mold we could find, we have become pretty complacent. Let it rain.

I'm sure the folks in Texas aren't complacent. We've been in some terriffic storms in Texas (below, an historic photo of flooding in Texas City). We have seen the results, or rather, the aftermath, of some incredible flash floods. Standing in a dry streambed one day at the foot of the Guadalupe Mountains (above), I was puzzled to see tree trunks. 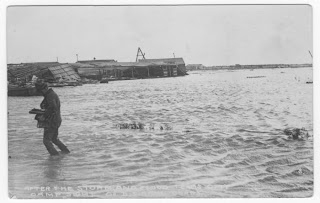 No trees that size were visible in any direction. Then Tom pointed up, to the ponderosa pines thousands of feet above us. Holy Disaster, Batman!

Also in western Texas, we crossed the headwaters of the Brazos, "headwaters" being a relative term. I didn't see a drop of water. But I know that is not always true. Curtis Bishop informs us that between June 17 and June 28, 1899, rainfall averaging 8.9 inches fell over 66,000 square miles, causing the Brazos River to overflow its banks and inundate an estimated 12,000 square miles. Damage to property was estimated at more than $9 million and 284 persons were known to have perished in the floodwaters; thousands of others were left homeless. 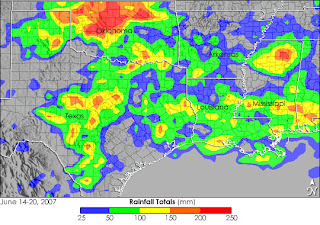 The flood's highest recorded stage was at Hearne, where, as at many points, the waters rose above all available flood gauges. *

Tom's book, Scalp Dance, began with an incident that occurred along the Brazos River. To read more, see his blog, "Hope in a Bottle," posted on February 7.

The power of water is terrifying and amazing. I hope the folks in Texas have some clear skies soon.

*The Handbook of Texas Online.

One of our dear friends in the East, Pat Fairburn, is a member of the Confederation Of Union Generals ( COUG ), and that organization is preparing for a busy time in Gettysburg, Pennsylvania, on the weekend of July 6th to the 8th. How we would love to join them! Pat writes:

In addition to the many events taking place as part of the annual Gettysburg Battle reenactment, we will be appearing at two noted landmarks in Gettysburg --The Farnsworth House Inn and the Daniel Lady Farm. COUG is a Lancaster-based living history organization founded in 2004 by Lancaster native, Michael Riley, who portrays Union General John Fulton Reynolds. COUG is one of the fastest growing living history organizations on the East Coast, and their "mission" is to educate the public about the military history and personalities of the Civil War by having its members portray historical figures of the period, primarily Union Generals, officer staff, and noncommissioned officers.

Typically, our group sets up a General Headquarters camp, and educates the public through a series of "Meet The Generals" conferences where the Generals and Staff address the visiting public in a first person, in character, narrative about their own role/accomplishments during the late "conflict".

As part of our preparation, each historical impressionist steeps himself in the history of the era, and of the personal history of their adapted "persona", as to make a historically accurate presentation in both appearance and content.

This approach has proven to be enormously appealing to the general public, and an ideal way to engage people of all ages, especially youth, in the most defining moment of the country's history. We believe this approach accounts largely for the success of the organization and its growing popularity with organizers of historical events.

If any of your readers are planning on being in Gettsyburg this July 6-8, here are further details about the scheduled appearances of the COUG officers:

"Friday, July 6 --- The Farnsworth House Inn presents "Meet the Generals", historical impressions of leaders of the Union Army as portrayed by The Confederation Of Union Generals ( COUG) a Living History organization. 8:00 P.M. at 401 Baltimore St., Gettysburg.

"Saturday, July 7 --- The Gettysburg Battlefield Preservation Association presents "Meet the Generals", a chance to meet leaders of the Union Army in a Headquarters campfire scenario as portrayed by The Organization Of Union Generals, COUG, a Living History organization. 8:00 P.M. at the Daniel Lady Farm, 986 Hanover Road, Gettysburg. 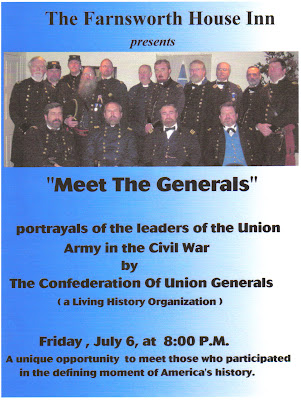