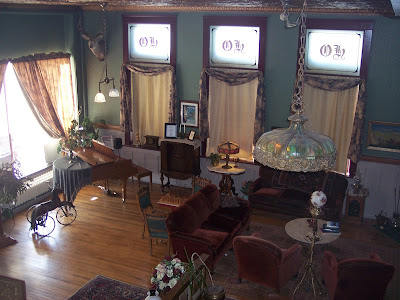 We didn't plan to stay at the Occidental; our tour of the West was not planned at all. We just got into the car and drove. Since our guests were Philadelphians, I had secretly hoped to reach Buffalo, Wyoming, at just the right time, but had no idea it would work out. While many fans of Western lore may realize that Owen Wister wrote The Virginian while residing in this Victorian hostelry, not everyone realizes Wister was a Philadelphian who now rests in Laurel Hill Cemetery in that selfsame city. Our dear friends, both of whom serve on the Cemetery Board, were thrilled.

After touring Little Bighorn, we called the Occidental from the Custer Battlefield Trading Post (Putt was outside cleaning up and looked up the hotel's number). Dawn answered the phone and said she'd love to have us. (Since it was Memorial Weekend, we were not always guaranteed quarters.) So we headed south to the Sheridan Inn for a quick drink, and then on to the Occidental. 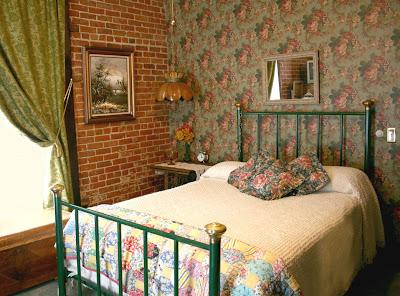 Among the famous folks to stay here were Buffalo Bill (which is enough for me), Calamity Jane, Teddy Roosevelt, and now the Goodriches and the Waskies. 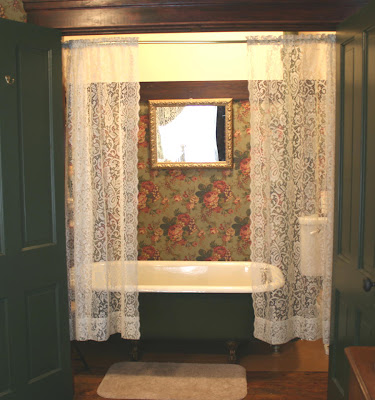 Carol and I left the husbands in the car and chose our rooms. I picked the "Hole in the Wall," so named because the bathtub is in the closet. I loved it and intend to remodel our master suite (acutally, create a master suite), based on this plan. Dawn explained the tub wound up in the closet because the lady who used this room tired of sharing the tub with ranchers who came in during the winter. Tom was thrilled to look out the window and count the trout in the stream just below. 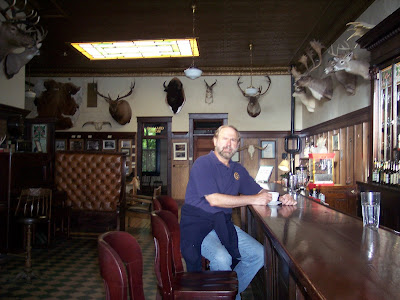 We we were too tired to enjoy anything but the comfortable beds when we arrived, but early the next morning, I made a pot of coffee and sat in the lobby reading Nebraska in the Indian Wars. I heard a clanging on the sidewalk outside and turned just in time for the American Legion guys to wave as they were putting the flags up and down the street for Memorial Day. When Andy and Carol joined me, we explored the bar. (Above, Andy has his morning coffee surrounded by elk, antelope, and buffalo. You're never alone in the Occidental.) 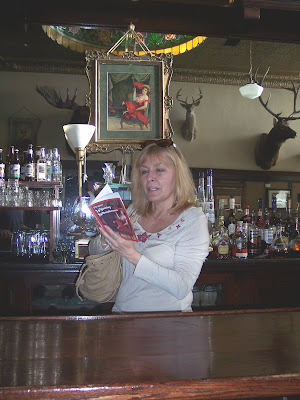 Carol (right)found an interesting volume on Wyoming whorehouses, but after some consideration, we decided we're just too old to have a lucrative business. Reluctantly, we packed our bags, then headed over to Duffy's for biscuits and gravy. Fortunately, we were there and gone before Tom saw the story about the mountain lion that had to be euthanized in downtown Buffalo just last month.

From our friend Mark Dunkelman. . . . 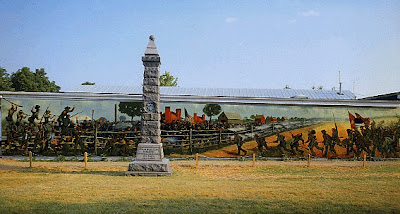 The 22nd Annual Reunion of Descendants of the 154th New York Volunteers will take place from 1 to 5 p.m. on Saturday, July 14, 2007, at the Pavilion at Lakeside Park in Mayville, the Chautauqua County seat. This year we will hold a joint reunion with descendants of members of the 112th New York, the Chautauqua County regiment raised in tandem with the 154th in the summer of 1862. After their organization, the two regiments left Camp James M. Brown in Jamestown and went on to very different careers in the Union army, not meeting again until near the end of the war, in North Carolina in March 1865. In our program, I’ll present an overview of the 154th New York’s history and Joel Babcock, a descendant of members of both regiments, will relate the 112th’s service.

For the third consecutive year, City Fiddle will entertain us during the 1 to 2 p.m. registration period with instrumental music from the Civil War era. The group consists of Phil Banaszak and his wife, Gretchen, of Buffalo, playing fiddle and guitar. Phil is a great-grandson of First Lt. Alexander Bird of Co. F. He and Gretchen are outstanding musicians, so arrive early and enjoy their performance. Check out their site http://www.hardtackregiment.com/ (Above Left, Mark's mural of the 154th in action at Gettysburg.)


. . .to Phil Kearny, 1815 . . . . the namesake of the fort near Story, Wyoming, where on June 15 - 17, the 140th anniversary of the Wagon Box Fight will be observed. There will be a tour of Wood Road, block houses and Wagon Box Battlefield, a symposium, living history demonstrations, Michael Terry Native American Encampment and programs, military tactics demonstration and more, 307-684-7629.


and to The Battle of Blackjack, which occurred June 2, 1856. Visit http://www.blackjackbattlefield.org/ for more information on tomorrow's events marking the 1st battle of the Civil War.
Posted by Deb Goodrich at 7:07 AM