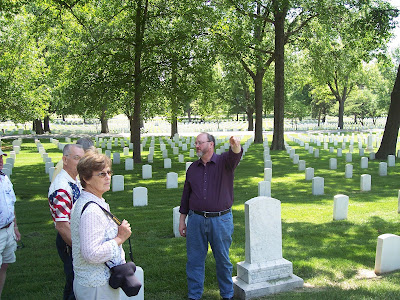 Fort Leavenworth, Kansas, is one of my favorite places. It has the feel of a college campus but the urgency of the important military installation that it is. It is also beautiful. The rolling land, the historic buildings, the neatly manicured cemetery--the smart folks that work there! Command Historian Kelvin Crow, who is among those smart folks, joined us on our weekend tour of the Post to share his voluminous knowledge (above, in the National Cemetery with author, Dale Vaughn, and artist, Kathleen Cobb).
After weeks of rain, Kansas had such a glorious weekend that it was made to order for walking in the steps of history. This fort is certainly the place to do it. From Stuart to Sherman to Sheridan, to Eisenhower to MacArthur to Powell, nearly every significant name in American Military History has walked these grounds. 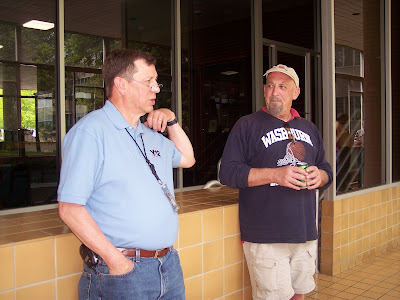 Joining us for lunch in Bell Hall (soon to be torn down; the Command and General Staff College is moving to new digs in Lewis & Clark Hall), was our bud D. K. Clark. As you may have learned in previous posts, D. K. is the smartest man here. Just ask anyone else and they'll tell you the same thing. He talked about exactly what it is they teach at CGSC. It was the most interesting lunchtime conversation I'll guarantee you've heard in ten years. (Above, right, D. K. and Tom plot Indian Wars strategy.) 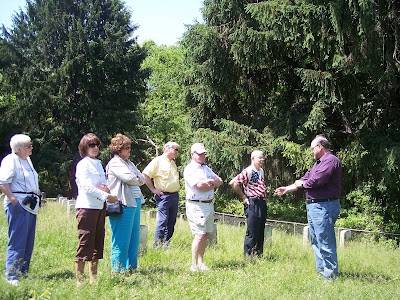 Being a cemetery nut, of course, we hit several of those, some sites that were quite surprising. Right, at the cemetery for the Disciplinary Barracks, Fort Leavenworth, Marilyn Wolford, Judy Theis, Terry Hobbs, Ken, Jack, Dale, Kelvin.
Buried at Mount Muncie not far from such Kansas history luminaries as Daniel Anthony and General Blunt, are Dick Hickock and Perry Smith, executed for the murders of the Clutter Family in western Kansas, (the subject of Truman Copote's In Cold Blood). The graveyard sextant told us they still have the contract with the state and federal prisons to bury the convicts, though they don't get as many these days. 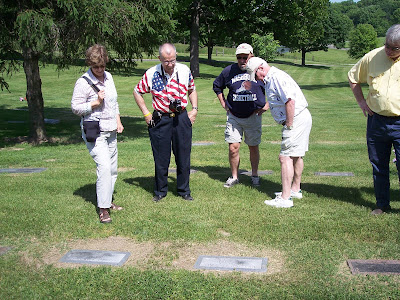 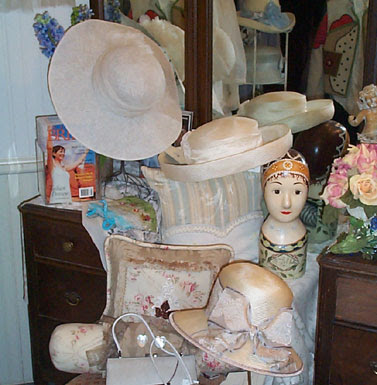 No tour is complete without shopping so we headed across the Missouri River to Weston where we had a cold one in Pastimes, and our tour-ees roamed the streets and shops.