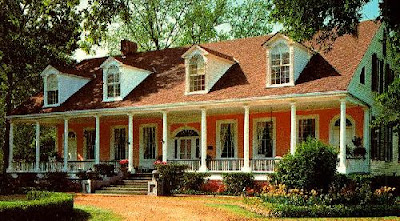 At her home, The Briars (above), an 18-year-old Varina Howell married a widower twice her age on February 26, 1845. She was bright, very tall, attractive, educated and possessing large doses of common sense. He was a good catch in many ways. He was well-to-do, well-educated, well-connected, well-versed in literature and politics, and well, his prospects appeared bright. Ahh, Varina! If we could have told you what your life would be like as Mrs. Jefferson Davis, would you have chosen the same path? 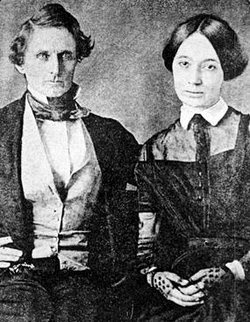 Spoiled to pieces as the baby of a large family of mostly girls, heavily influenced by his older brother, Jeff Davis was used to having his way and accommodating a wife who didn't see eye-to-eye was not in his plan. When she complained, he checked out a book from the library on how to be a good wife. (I know, I know. But it was a different time. . . ) Varina read it and took it to heart. She wanted her marriage to work and was willing to be the one to bend. (The Davises, left, in their wedding portrait).

In the following years, Jeff would grow to value his wife's judgment and ability, though perhaps never as much as she deserved. Varina did not seek to be the wife of a politician yet that is exactly where fate placed her. She told her husband that she could bear anything but separation from him, yet circumstance would separate them over and over. When Jeff was sworn in at Montgomery, Alabama, as the president of the Confederacy, Varina was back at home packing their things. At the war's end, Varina sold many of their belongings just before she fled Richmond. In the haste to leave, the check was not cashed and thus could never be cashed. Many knick-knacks that were precious to her were left. Jeff called them "flubbery."

As the Confederacy collapsed, the Davises found themselves on the run, further and further South, writing hasty notes to one another as they traveled parallel routes, spending a night here or there. 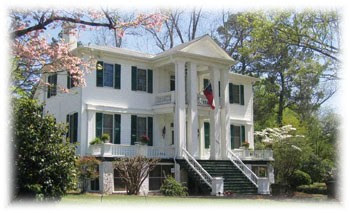 (In Washington, Georgia, Varina stayed for a while in this home, left, now a bed and breakfast and you can sleep in her room, below.) When Davis was captured, she lobbied for his release and finally joined him in prison. Following his release two years later, the family struggled to make a living. Their surviving sons died (they had lost one before the war, one during). 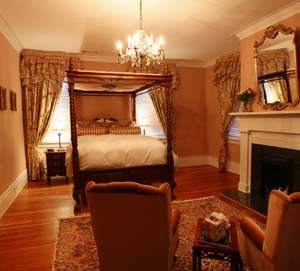 After Jeff's death, Varina changed her name to Varina Jefferson Davis. She lived in New York City with her younger daughter, Winnie, who was born in the Confederate White House. Winnie died at the age of 34, leaving her grieving mother with only one child, Margaret, to outlive her. Varina said she would often sit with her "spirit" children.

Varina Jefferson Davis was born on this day in 1826. She was married to Jeff for 44 years. Varina died in 1906 and is buried beside her husband in Hollywood Cemetery, Richmond, Virginia. 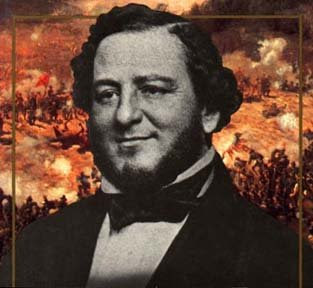 On May 6, 1884, Judah P. Benjamin, right, died in Paris. A couple of years ago, Tom and I, along with our friends Andy & Carol Waskie and Jean Jacques and Christine Roussel, spent four hours searching Pere Lachaise for his grave. At last, we found it (below, left). Benjamin was a U. S. Senator for Louisiana prior to the Civil War, and later held practically every office in the Confederate government.

His escape from Richmond to Europe reads like a script for an Indiana Jones movie. He was often called the "Brains of the Confederacy." Somehow, recalled Varina, despite blockades and other obstacles, his pantries were full during the War. A salute to Judah P. Benjamin and the kind of friends who will spend four hours helping you find his grave!

Deb and Tom,
Ya'll sho do git around. Takes a lot of courage to refer to DK as your "buddy." Some of us know DK. Nuf said. I usually see him on Thursdays, so I'll let him know he was mentioned in dispatches. I was glad to see that the picture of Alex Cord (I am so embarrassed) was off-set by the one of Deb who appears to be in the Badlands. I've been to Topeka I guess three or four times this year, but they have all been for evening or all-day political events. Been to see the grandkids in OH and NC and going again to NC in June and SC in July. Had a counter-insurgency week-long consulting job in the DC area. Got to go to Carlisle to finish the research on my Korea book. I'm ready to get that project done.
Hope all is well with ya'll. Keep those blogs coming.

DG--Rich, come and see us sometime, and bring D.K along!
Rich Kiper is the award-winning author of Major General John Alexander McClernand: Politician in Uniform and Dear Catherine, Dear Taylor: the Civil War Letters of a Union Solder and His Wife. Can't wait to read the next work.

Hey Deb!
I like your blog ...especially that cute blonde cowboy! Real eye candy! (I am an artist and visual things are good!)

One of the Girls

DG--My artist friend is referring to the blog of May 3 for those of you who missed it. 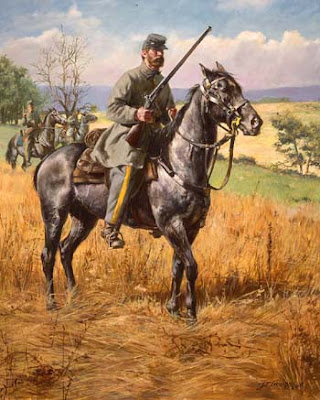 Please join the Lynchburg (Virginia) Historical Foundation during May 11 - 13, for a weekend of Civil War history packed with events for one and all. They start Friday evening with dinner at Arthur S. DeMoss Learning Center, Grand Lobby, Liberty University, with nationally renowned Civil War artist Mort Kunstler and author Rod Gragg. Mr. Kunstler will unveil his Lynchburg print, Going Home, The Stonewall Procession, Lynchburg, Va, May 13, 1863. The evening will start at 6:30 p.m. Tickets - $55.00 – Limited Seating. Visit their website for more information on the evening and the weekend's other events. Also, find out how you can own the wonderful Civil War art pictured here. At right, Don Troianiai's The 4th Virginia Cavalry.
http://www.lynchburghistoricalfoundation.org