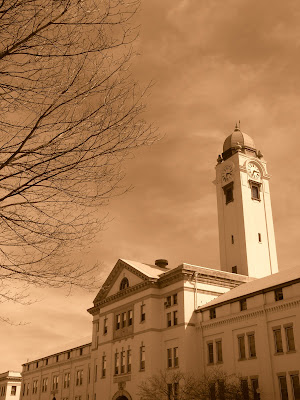 For all our tour-goers and wannabes: The May 5 & 6 tour is being rescheduled. The May 19 tour to Fort Leavenworth is sold out(though we sometimes have cancellations, so I can put you on a waiting list); there are seats remaining on the May 20 tour (with the same itinerary), but email or call quickly because we have a lot of people interested who are supposed to call back to confirm! 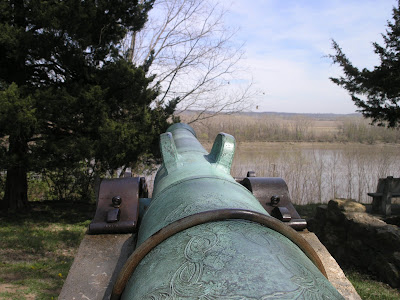 I am so excited about this tour! Both Tom & I have so many friends in various departments at Fort Leavenworth, and we have spoken to the historical society, consulted on media training, and helped out with staff rides. It is always an interesting place to visit. Overlooking the Missouri River (right), the Post is simply beautiful in addition to having an incredible place in American, nay, World, history.
While the Fort was established in 1827 to protect America's frontier, it was in 1881 that Gen. William T. Sherman established the School of Application for Cavalry and Infantry. That school evolved into the U.S. Army Command and General Staff College. At the top of the page is Grant Hall, named of course for General/President Grant, though he never visited the Post. (It was Sherman's way of sucking up to the superior! Always a smart move!) 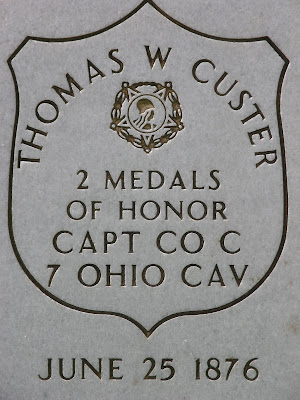 In the years between the World Wars, graduates included such officers as Dwight D. Eisenhower, Omar N. Bradley and George S. Patton. During World War II, some 19,000 officers completed various courses at Fort Leavenworth. Before the modern era, the officers who had served at this post read like a Who's Who of military History: Phillip St. George Cooke and his son-in-law, JEB Stuart, Edwin Sumner, Arthur MacArthur (Doug's Dad), Phil Kearny, Stehphen Watts Kearny, Bennett Riley, Henry Leavenworth, Benjamin Grierson, Winfield Scott Hancock, Phil Sheridan, Robert E. Lee, Joe Johnston, ahhhh, I'm out of breath! One gets chills just thinking about the legends that walked these grounds. Of course, no tour of mine would be complete without a visit to the cemetery where we will see the grave of Tom Custer (above left), the recipient of two Medals of Honor. He died with his brothers, brother-in-law, and nephew at the Little Bighorn.
One of our dear friends, a retired officer who teaches at the CGSC, will accompany us throughout the tour and fill us in and much of the little-known history of the post. Following our visit to Leavenworth, we cross the river to Weston for fun and frivolity. (photos by Michelle Martin)
On June 30 and July 1 we have tours scheduled to Westport and various points in and around Kansas City, including the Veranda Sale at the Harris-Kearny House. Ladies, we can stop at an ATM if there is a need! On July 21st, we head to Atchison for the Amelia Earhart Festival. So many fun tours! If you have a group of folks that would like a custom tour, say on Jesse James or Quantrill's Raid, just drop us an email.
____________________________________________

Email
Deb,
I am thoroughly enjoying your blog. I have just finished with February. I am going to slowly cover it over the next few days. . . like sipping a fine wine slowly to enjoy it (as if I would know the differences in fine wines).
Eddie Hunter 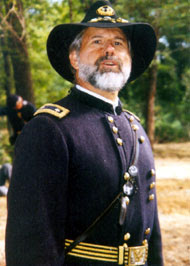 Our friend Andy Waskie (left) will be joining us for a special event at the Historic Ritchie House here in Topeka on the afternoon of May 21st. As. Gen. George Meade, Andy will lead the salute to veterans that will highlight the service of Ritchie in the Civil War. I'll keep you posted on the details. Also in attendance, will be the lovely Clara Barton, as played by Andy's wife, Carol Neuman. Clara is the only woman to be honored with the naming of a Kansas county.
Posted by Deb Goodrich at 9:03 PM