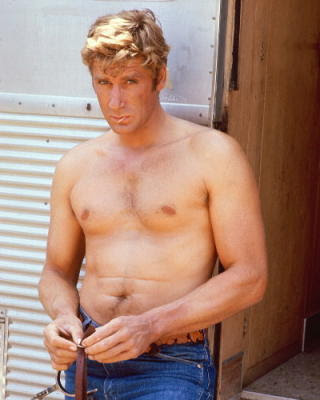 Maybe Alex Cord is embarrassed by his beefcake image, but......geez, I couldn't resist. I must be the most ardent fan of this rodeo-rider turned actor (next to his lovely wife, Susannah, I'm sure). I was a fan of Alex's since I can remember. Gored by a bull at the age of 19, Alex was flat on his back and began reading to pass the time. He read plays and acted the parts in his head. That was it.
Alex was chosen for the lead role in the 1966 remake of the movie Stagecoach. I really can't compare the two movies--they're just different. For one thing, Alex smolders. One couldn't help but love John Wayne, but he was a different kind of Western man. Alex was smoky, passionate, unpredictable, irresistible. When introduced to his costar Ann-Margaret, everyone expected spontaneous combustion between the two, but Alex was rather cool. In an interview shortly after he explained why:

"The kind of girl who seems to impress every other man manages to leave me cold," he said. "I don't go for actresses -- they're too self-centered. The raving beauties like Ann-Margret and Elizabeth Taylor don't raise my pulse. They're too studied. They're great for other men, but I don't go for calculated beauty of studied sex. And that's usually what you get with an actress. Her whole life revolves around her face, the way her hair is done and the clothes she wears. They all look alike. Also, they're always looking around, when you take them out, to see if anyone's noticing them. Hollywood actresses are so determined to get there that, notwithstanding their beauty, they have a certain masculinity. They crowd a guy out."I'm attracted to very feminine girls," Alex went on, "the kind of girl who looks as though she needs help getting across the street. I like a girl who is not conventionally pretty, who doesn't think of herself all the time. That leaves out actresses in my personal life."

He's a fine actor. I forced Tom to sit through A Minute to Pray, A Second to Die (left), starring Alex. Tom really loved it. I told him so. It's a dark, intriguing movie. Rent it. Alex also guest-starred on nearly every TV Western ever made so watch the credits.
Other fans may recall Alex on "Airwolf," where in my opinion, he was way hotter than Jan Michael Vincent. In 2002, Alex remarried, a beautiful young woman who loves horses as much as he does and they appear to be living happily ever after on their ranch. He also has another career as an author. Oh my, if I keep talking I'll swoon. Happy Birthday, Alex. All the best from a legion of fans!
____________________________________________
Stonewall-The South's Terrible Swift Sword

This new special publication by the Weider History Group is a MUST have. If you were illiterate you could buy it for the images alone. In fact, I am framing page 9 as we speak and hanging it over my desk in a place of honor. Historians such as John W. Bowers, Bud Robertson, Daniel Sutherland, Peter Carmichael, Jack Davis, and a host of others offer insight into various aspects of Old Jack's career. The editors have done a fine job putting together this publication. To order, click on http://www.historynetshop.com/cwsj07.html
(You do know it's a law now that if you discuss the Civil War you have to interview Jack Davis.)