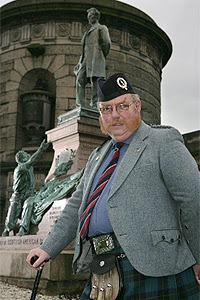 The Reverend Dr. Bill Mackie (right) is organizing a tribute to the Scots who fought in the Civil War. The ceremony in Edinburgh, on July 21, will mark the anniversary of the Battle of Manassas in 1861. Yes, Edinburgh, as in Scotland. The ceremony will be held in front of the Abraham Lincoln Memorial. Yes, Lincoln, as in the American president. Is this a small world, or what?

"We're still looking into exactly who took part and whether any regiments from the Edinburgh area were there," said Mackie. He hopes it will become an annual event.


Not only did I find this an unusual story, but the great number of comments it garnered is equally intriguing. Click on http://news.scotsman.com/international.cfm?id=737792007 to read the entire article, feedback, and leave your own. Especially interesting is the assertion that between 150,000 and 500,000 Scotsmen died in the American Civil War. Lots of reaction to that one!


If you, like I, are descended from one of those noble Scots, you will also enjoy this link, http://www.strom.clemson.edu/presentations/Scots-Irish.pdf, which has lots of quotes about how the Scots created, defended, and maintained America. Yaaay!!!!


Now, dear readers, much as I would love spending the rest of my day with you, I must return to the basement to rip out more rotten carpet. Life moves forward, no matter how much we live in the past.
Posted by Deb Goodrich at 11:19 AM