Virginia in the News 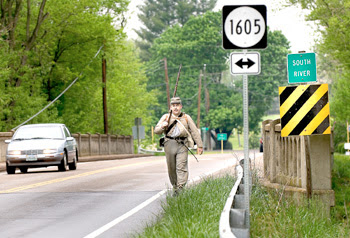 U.S. Army Lt. Col. D. Jonathan White, a Virginian, took the first steps Thursday in following the path of another famous Virginian--Stonewall Jackson in the Valley.

Susan White described her husband, a native of Roanoke, as a man bound by duty. "It’s his way to honor those who defended Virginia," she said of the walk. "He is a son of Virginia."

In the spirit of his walk, White wants people to donate money for preservation to the Shenandoah Valley Battlefields Foundation based at New Market. The foundation’s web site is at http://www.shenandoahatwar.org/. White has a link to the site on his Web page at http://www.walkthevalleycampaign.com/. 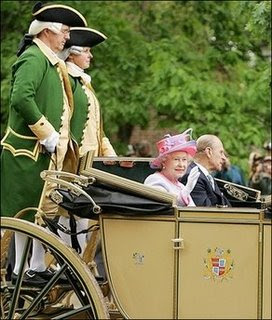 The Queen was in Virginia and I was back in Kansas. Darn! In honor of the 400th anniversary of the founding of Jamestown, the first permanent English settlement in the New World, Great Britain's monarch visited the former colony. She addressed the General Assembly in Richmond, the oldest legislative body in America (though I have heard some argument from the Iroquois, so this may be open for debate). At left, she and Prince Phillip ride in a carriage bearing the coat of arms of the family of Robert E. Lee.

In an amazing incident of synchronicity, Cheryl and I were talking about the movie Dirty Dancing yesterday, how great it was, how many times we've watched it, etc, and lo and behold, this shows up in my google news this morning. It just proves that if you send thoughts into the universe, the universe will send you the knowledge you seek. (Somebody should write a book about that!) 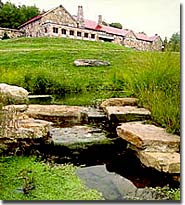 LAKE LURE, N.C. (AP) -- It's been two decades but they're still coming. Almost every day people make a pilgrimage to the Lake Lure camp where the classic movie "Dirty Dancing" was filmed. John Cloud is developing the site where "Dirty Dancing" was made into a luxury residential community. He says fans are still making the effort to find the movie's locations. Lionsgate has screened a 20th anniversary edition of the movie that made stars of Patrick Swayze and Jennifer Grey. Many of the interior shots were filmed at an old boys' camp at Lake Lure. Most of the exterior shots were filmed at Mountain Lake Resort (right) near Roanoke, Virginia.
Posted by Deb Goodrich at 11:32 AM