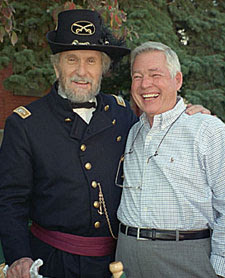 Dr. James I. "Bud" Robertson is widely known as the biographer of Thomas J. "Stonewall" Jackson. A long-time professor of history at Virginia Tech, Bud is also the executive director of Tech's Virginia Center for Civil War Studies. He is also the reason I was in therapy for ten years.
Back when dirt was white and I was a junior at Patrick County (VA) High, I was selected to attend Governor's School for the Gifted and Talented (DON'T LAUGH!) at Mary Washington College in Fredericksburg. I cannot make enough positive comments about this experience, but one of the best aspects of our location was the quality of after-dinner guest speakers available to us. Since we were so close to D. C., experts who might have been on the news that morning were with us precocious kids in the evening. On the night that Dr. Robertson was to be our guest speaker, I was beside myself with excitement. He was an idol in Patrick County where three-fourths of the college-bound students went to Tech, and he had taught many of our teachers so they revered him and passed that reverence on to us. 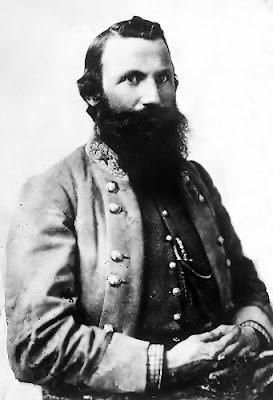 I can't remember exactly what Dr. Robertson's talk was about that night; let's just say it was STONEWALL. In the question-and-answer period I jumped up to explain that I was from Ararat, and would Dr. Robertson kindly comment on our favorite son, Gen. J. E. B. Stuart (left).

You have to understand. Most of the folks in that room had never heard of Ararat, did not even know Virginia extended west of Roanoke, and I had one of three hillbilly accents out of 150 "gifties." I really needed Dr. Robertson to make me look good.

He proceeded to trash Stuart. I can't remember what he said because I was red with humiliation and the laughter of my comrades. I slumped in my seat and sank into depression. It took me 20 years, two failed marriages, and years of psychiatric counseling to overcome my embarrassment enough to earn a degree in history. 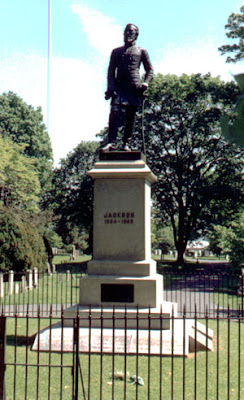 Today, Bud will deny that he ever said anything uncomplimentary about Stuart but I believe in my heart his thoughts have been tempered by students like fellow Araratian, Tom Perry, who studied under Bud and founded the JEB Stuart Birthplace Trust, putting Ararat on the map and Jeb in his proper category of respect.

Let it be said that I have forgiven Bud, even though he is personally responsible for derailing my life. And on this day when our beloved General Jackson died, let us stop to honor the man who brought him to life for so many of us.

This Bud's for you, Bud!

(Top photo: Two of my heroes: Bud with "Bob" Duvall on the set of Gods and Generals. Photo courtesy of Virginia Center for Civil War Studies. Right, General Jackson's grave in Lexington, Virginia, courtesy of findagrave.com)
Posted by Deb Goodrich at 12:44 PM

Thanks for visiting my blog and inviting me to visit your very interesting blog. I've added a link to this blog under my "Interesting History Related Blogs" category.