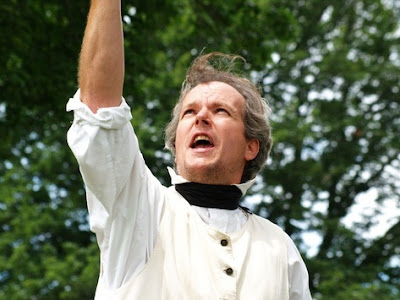 While I was hosting a garage sale and generally leading the life of a dung beetle over the weekend, other people were traveling and attending edifying events. From Michelle Martin in Bartlesville, Oklahoma, come these photos of our friends at Fort Scott, Kansas.

Following the Civil War the southeastern Kansas town of Fort Scott began unparalleled growth, spurred by rich natural resources and Fort Scott's being selected as a major hub for the railroads that were spreading coast-to-coast. (In fact, in 1899 Fort Scott was rivaling Kansas City as the largest rail center west of the Mississippi.) Street Fairs were sweeping the country and it was decided that Fort Scott would throw the Grandest Street Fair of them all. Noted Fort Scott Historian Don Miller writes of the 1899 Parade: "Hundreds of people labored thousands of hours decorating dozens of horses, mules, wagons, bicycles, and themselves with flowers and filler that made it challenging to separate foliage from participants . . . ." Fort Scott's popular Street Fair was continued on for many years and for reasons unknown was discontinued.

In 1982, a not-for-profit corporation was formed to revive the Street Fair Festival and "The Good Ol' Days" has been held every year since the first full weekend in June. 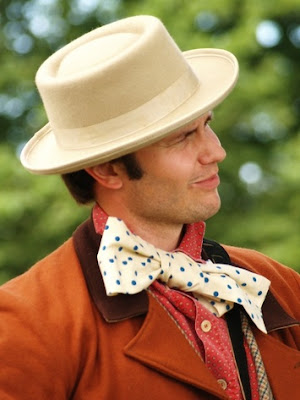 The annual festival is extremely popular with adults and children alike. The Good Ol' Days draws thousands of people into Fort Scott's Victorian downtown for a weekend filled with arts, crafts, specialty foods, children's games, and live entertainment. The adjacent Fort Scott National Historic Site provides visitors with an opportunity to experience the living history activities of an 1840's frontier fort. Our long-time bud Tim Rues (he introduced me to Tom) is pictured above portraying the U. S. Senator and Civil War general, James Henry Lane. Whether he was calling on the powers of Heaven or Hell was never really clear, but Lane's oratory fervor is surely captured by Tim. ( 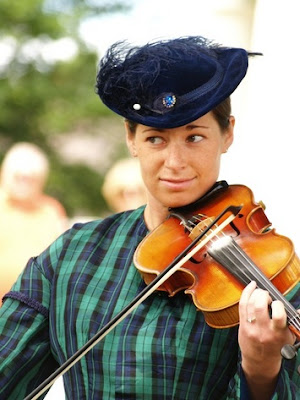 I keep nudging Tom to write the biography of the man whom he calls "Lincoln's Rasputin." Lane, nut though he was, arrived at the White House just as the new president needed protection and forever had the president's ear.) Providing music at Fort Scott was the band, The Freestaters, of which our friends Jon Goering (above, left) and his wife, Betsy, (right) are members. I'm not sure who he is portraying, but Arnold Schofield (below) brings new meaning to "Ahnold." 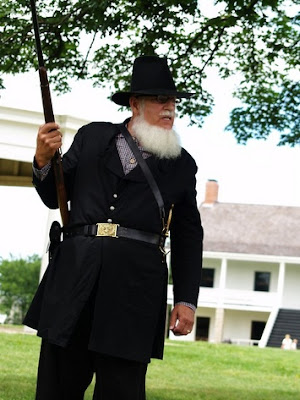 And with a gun in hand. . . oh, it makes me shiver to think of him! (Schwarzenegger could get a few lessons in intimidation from Schofield.) It looks as if the festivities at Fort Scott's Good Ol' Days were just too much for this babe. . . .

See the rest of Michelle's images at http://spotted.morningsun.net/pages/gallery.php?gallery=317103

Speaking of Lincoln
Spencer County, Indiana, boyhood home of the 16th president, is putting up new Lincoln signage. The panels, initiated and funded by the Indiana Abraham Lincoln Bicentennial Commission, will be attached to the existing “Indiana-Crossroads of America Signs” that are located at the state’s borders.

Spencer County is home to Lincoln Boyhood National Memorial, Lincoln State Park, Lincoln Pioneer Village, Lincoln Ferry Park, Lincoln Landing, and Buffalo Run Farm, which all offer opportunities for visitors to learn about Lincoln’s life in Indiana. The county plans a series of special events throughout the next two years to mark the bicentennial of Lincoln’s birth, which will occur February 12, 2009. For a complete schedule or to request a free copy of Spencer County’s Lincoln Visitors Guide, visit www.ThinkLincoln.org or call 1-888-444-9252.
Tom and I have spent lots of time in Spencer County which boasts a beautiful, rolling countryside and a very personal glimpse at the life of Lincoln. This area is one of the most enjoyable in America for your entire family.
____________________________
Speaking of Pick-up Lines

Several years ago, BT (Before Tom), I was out with a group of gals in Cody, Wyoming. I believe we were in the Silver Dollar Saloon when a lanky cowboy asked me to dance. He told me his name was Dusty Holliday, and reluctantly acknowledged that, yes, he was, in fact, a direct descendant of the gunslinger.

I smiled sweetly. "Doc didn't have kids, at least no legitimate ones," I responded. "I'm a historian."

The dance was fun, albeit short, and Dusty went searching for a business major.
Posted by Deb Goodrich at 7:50 AM

Thanks for showing off some of the Fort Scott Good ol Days photos Deb! It was a great weekend had by all. If any of your readers are interested, June 23rd is Territorial Days in Lecompton. They can expereince the heaven and hell raising oratorical fireworks of Jim Lane, see the devotion of Clarina Nichols and Sara Robinson to their causes, hear the stories of the Widows Barber and Doyle and meet a South Carolina belle Betsy Hoole and her baby Adda and hear how they sleep at night in good ol rough and tumble Kansas Territory!