Communing with the Dead 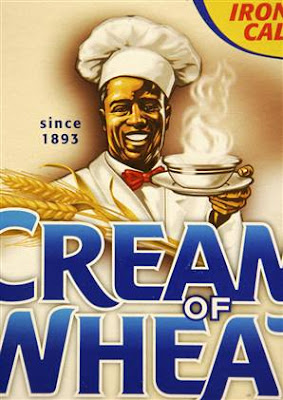 As a Southerner and a grave collector, I am a big believer in identifying graves. I was gratified to learn that the man who was depicted on the Cream of Wheat packages has received a proper tombstone.
According to the Associated Press, Frank L. White was the model for the white-hatted chef on the Cream of Wheat box. He is buried in Woodlawn Cemetery in Leslie, located between Jackson and Lansing, and until a few days ago there was only a concrete marker with no name. Now, there is a lovely granite marker with not only his name but an etching from the Cream of Wheat box.
Another must-see on my world-wide grave tour. 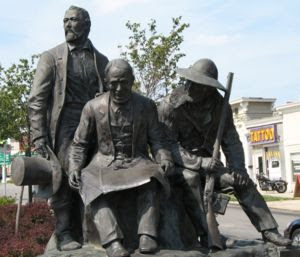 June 30 Tom and I are headed to Westport for a tour of that historic area of Kansas City. A big part of that tour will be devoted to Mountain Man, Jim Bridger ( a Virginian, by the way), who operated a bar in Westport after his eyesight began to fail him. We'll not only visit his final resting place, but those of other notables. The Harris-Kearny House will be having its annual Veranda Sale so you won't want to miss this tour. Email me for a reservation. etalgoodrich@aol.com. The statue at right depicts Alexander Majors (one of the founders of the Pony Express), John Calvin McCoy (father of Kansas City), and Bridger. Bridger is a prominent figure in Tom's Scalp Dance. A more colorful man never lived.
Posted by Deb Goodrich at 12:23 PM