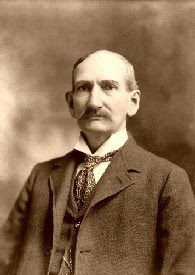 Turk said he wanted to do something meaningful for the national museum.

Museum Executive Director Jim Dunn said the gun would be a prize piece in the museum’s collections.

Turk said he bought the gun at an auction in 2005, before he knew about Fort Smith. It was part of a collection of artifacts discovered in an old wooden trunk in a barn in Scott County, Ky., on land that belonged to James’ ancestors for centuries.

The gun grip is marked with an “F” for Frank James and is notched, Turk pointed out. It is intact although not functioning. Turk said he thinks the gun is one of many James used in his criminal career.
Posted by Deb Goodrich at 11:08 AM