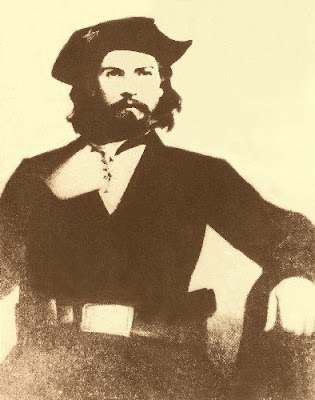 I receive about 75 to 100 Google alerts daily on topics related to the Civil War, Indian Wars, Wild West, Deep South, and Home Improvement. What an invaluable service! Until a few days ago. . . .

The subject of my alert was Bloody Bill Anderson. I opened it to a video of a couple engaged in . . . . well, use your imagination. I closed and deleted it immediately, but not before my computer was infected with at least one virus. I have been struggling with spyware programs all week.

Even from the grave, Bill Anderson wreaks havoc.

Frank Stallone (left) has hit the big time with his role in the new movie, Fred Claus. Don't know Frank Stallone? He happens to be Sly's brother, but our Western fans might recall him as Ed Bailey (below, with Kate and Doc), the first victim of Doc Holliday in the film Tombstone. A few months ago, our bud Andy Waskie escorted Philadelphians Sly and Frank through Laurel Hill Cemetery as they were scouting scenes for a new movie. 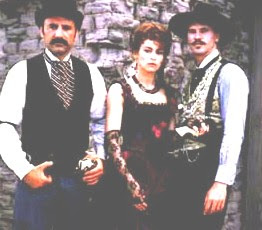 "You don't scare me, Holliday. Without them guns, you're ain't nothin' but a skinny lunger!"


Alas, with the sun coming up, after a night of poker, drinking and smoking, poor Ed's patience had run its course. Too bad he couldn't have chosen his words more carefully for they were to be his last. Ed Bailey-- his role was a brief one. But it was rich!
Posted by Deb Goodrich at 12:49 PM

Hey Deb,
You know the Border War continues. You have to look up the Wal Street Journal this week. There was a great article on the KU/Mizzou football game this weekend for the Big 12 NOrth championship. It is really like Quantrell, Anderson, Lane, James, Jennison and the boys are riding the borders again! The article talks about a fella in a bar in KC MO wearing a Mizzou jersey with not his own name on the back but, yep you guessed it...Quantrell! I don't think the war is quite over!