While browsing the internet I came across the website for a high school friend, Leslie Shelor. Leslie is a weaver and has a shop in Meadows of Dan, Virginia, at the top of Squirrel Spur. 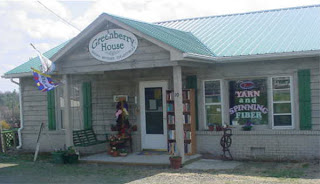 For the uninitiated, Squirrel Spur is about the crookedest mountain road I've ever been on. Once, we were on a school bus headed up the mountain to the Dan River Queen Riverboat and the bus had to stop while a dumptruck backed up to let us by. The scenery is spectacular. Anyhow, Leslie has her shop, The Greenberry House (above), where she sells original creations from the yarn she spins with the cooperation of her pet Angora rabbits. Leslie and I traded correspondence. As usual, all roads lead to Tom Perry:

Tom Perry's new book is out and it is terrific. I have copies here at the store and he's supposed to do a book signing here December 8. If he can sit still long enough!

So, dear readers, here is the golden opportunity to drive up Squirrel Spur, visit with Leslie and sample her wares, and get your autographed copy of Patrick County by Thomas David Perry. From Arcadia Publishing's website: 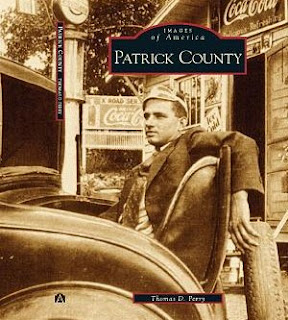 Book Description: Formed in 1790, Patrick County is named for the Commonwealth of Virginia’s first governor, Patrick Henry, who lived in neighboring Henry County. Located along the border of North Carolina where the Blue Ridge Mountains of the Appalachian Range cross the state line, the “Free State of Patrick” is half Piedmont and half mountain plateau. This dividing geographic feature is reflected in the mountain people of Scots-Irish and German descent along with English living below the mountain heights. This divergent population produced tobacco magnate R. J. Reynolds; Civil War general J. E. B. Stuart; Virginia governor Gerald Baliles; Virginia’s highest-elected female, former attorney general Mary Sue Terry; and World Series pitcher Brad Clontz.

Tom produces a monthly e-mail newsletter about regional history from his Web site, http://www.freestateofpatrick.com/ Here you can order this title or one of his many others if you're unable to make it up Squirrel Spur. The cover of this book features a vintage photo of Allen Culler, father of Benton Culler. Isn't it a smashing picture? Tom is in Philadelphia on a talking tour right now. The Civil War world is small and incestuous.
_______________________________________________
The Dark Side of Mayberry

For years, I covered court in Dobson, North Carolina, reporting for the Mount Airy News. (Dobson is the county seat of Surry County.) I still go online to read the paper, where my high school bud and former editor, Tom Joyce, still labors in the journalistic vineyard. I couldn't help but laugh at this story:

A felony assault charge has been filed against a Mount Airy man who allegedly shot his brother in the back. Richard Lee Thomas, 48, of 628 E. Haymore St., is accused of assault with a deadly weapon, inflicting serious injury, in connection with the Wednesday afternoon incident. Thomas spent Wednesday night in the Surry County Jail before being released Thursday afternoon on a $25,000 secured bond.

Thomas allegedly shot his brother, William Burley Thomas, 46, of the same address, about 5:30 p.m. Wednesday after a heated argument at their home, according to the Mount Airy Police Department. At last report, the victim, who was wounded with a .22-caliber pistol, was in good condition at Wake Forest University Baptist Medical Center in Winston-Salem. 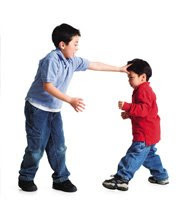 The brothers had been arguing and the situation escalated into violence, police said. At one point, William Thomas allegedly pulled out a gun and fired shots at Richard Thomas inside their house, said Lt. Detective Bill Bunker. That prompted the older brother to get a gun and shoot at his sibling, who was hit in the back. The pair has a long history of fighting between themselves, dating to the early 1980s, according to local authorities. Mostly, the altercations have been limited to fist fights, wrestling and hitting each other with brooms, they say, with Wednesday's shooting representing the first time that either of the two has been seriously hurt. In addition to residing in the same house with their mother, both brothers are employed by a local recapping business, according to police records.

I think they're my cousins. Check out the news yourself at mtairynews.com.

Deb-
Just catching up on your blog (I've been away in smoky San Diego) and noticed your mention of Paul Tibbets. I live near the Wendover Airfield where Tibbets and his crew planned and trained for the atomic bomb drops. It's an amazing place. Most of the structures remain intact and largely untouched. There are buildings that still have shelves full of some kind of literature, wall hangings, and furniture original to the base- just sitting there just as the men left it when the base was abandoned. In some of the hangars and offices, it looks as if Col. Tibbets and his crew could come back, sit at their old table, grab their training materials, and resume their conversation where they left off in 1944. I was at the base recently and I snapped a whole bunch of pictures, which include much of the still-standing structures as well as the bomb pits. If you're interested, I'll upload them to a web album and send you the link.

DG--Clint, that is fascinating. Yes, please send the link and I'll share it. 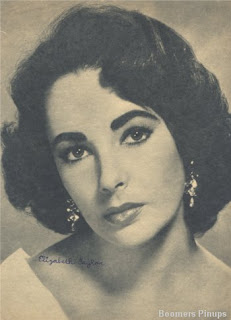 On this day in 1982, Elizabeth Taylor divorced John Warner (Her 7th divorce). Virginians loved having her as part of their history. A friend of mine, a dear and gracious lady, hosted the Warners at her Marion, Virginia, home and commented to me on how much she enjoyed Elizabeth's visit, and though Miz Taylor had been married these many times, at least the moviestar was not living in sin like so many of her contemporaries.

Knowing Leslie, I was not surprised to read her blog and find this guiding principle there. Visit her site, At the Top of Squirrel Spur,http://greenberry.blogspot.com/, and enjoy the beautiful photographs there. In the meantime, reflect on this eloquent philosophy:

"To live content with small means; to seek elegance rather than luxury, and refinement rather than fashion; to be worthy, not respectable, and wealthy, not rich; to study hard, think quietly, talk gently, act frankly; to listen to the stars and birds, to babes and sages, with open heart; to bear on cheerfully, do all bravely, awaiting occasions, worry never; in a word to, like the spiritual, unbidden and unconscious, grow up through the common."--William Henry Channing
Posted by Deb Goodrich at 8:26 AM

Thanks for the nice comments! Did you know that the State did some work on Squirrel Spur Road? It's even more awesome now!