The Griswolds welcome you to Wally World! 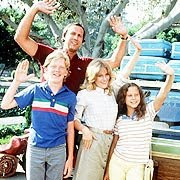 I slipped back into our bedroom this morning, tiptoing as not to disturb my sleeping husband, and grabbed the jeans I had worn last night. After dropping Noel at school around 6:45 I headed to "Wally World" to exchange a dimmer for the bathroom light and some amber light bulbs that were broken in the package. I actually like Walmart early in the morning--when the shelves are neatly stocked and the aisles aren't jammed with consumer mad Americans after a "sack of stuff."
While browsing through the bulbs, I kept feeling something brush against my leg. Reaching down to pat my calf I found an odd bulge. (No jokes, people!) It was my footie, the sock I'd worn yesterday. Not nearly as mortified as I should have been, I ducked into the Christmas section, grabbed the dirty sock and stuffed it in my purse.
It put me in mind of Linda Easter, a lady from Cana, Virginia, I used to work with. She was a goofy woman and remarked one Monday morning that her sister had come by early Saturday and dragged her out of bed to go shopping at Rose's Department Store. Linda wearily awoke, pulled on her pants from the night before, and went shopping.
After an hour or so, she was sufficiently awake to notice folks pointing, or looking away, or giggling behind her back. She looked behind her and found a pair of pantyhose trailing from one leg of her jeans.
I see a corollary -- something about shopping in discount stores and getting up too early. Or maybe it's just goofy women. 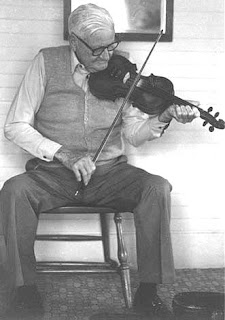 Arnold was also honored to be the guest of Uncle Tommy Jarrell, (left) the best old-time fiddler who ever lived. Uncle Tommy's little house in Toast was the place to be -- Mike Seeger, Alice Gerrard, Robert Sykes, Paul Brown, Andy Cahan, Terri McMurray, Brad Leftwich, Linda Higginobtham, Frank Bodie, Paul Sutphin -- the jam sessions went into the wee hours and how the floor kept from falling in is a bona fide miracle. Arnold and I had a grand time swapping stories of home.

Isn't it funny how small the world really is? Cool about Arnold. One of the people I miss most is Cap Ayers, who used to love to make music at Mabry's Mill.

And the panty hose in the pants thing used to happen to me ALL the time. But now I just wear skirts!

You just made my evening. Cap was my grandfather and I miss him too. I was just looking for something of his, and this blog came up in my google search.