Starting at the North Carolina/Virginia line, Highway 52 is lined with side-by-side produce markets where local apples, peaches, and cabbages are sold in season. 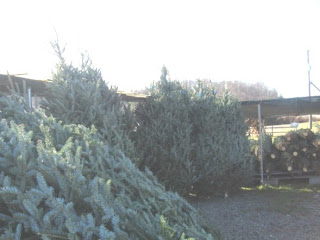 The coming of Christmas means the fruit stands get shipments of nuts and candies, oranges and tangerines, trees and greenery. My sister-in-law, Scarlet, owns S. C. Produce in Hillsville, Virginia. It's on Hwy. 221, on the right if you're headed out of town, on the left if you're coming in. I wish I could be there to smell the aroma of pine and spruce. My gosh, you can hardly see the building for trees!

Come inside and take one of these fragrant beauties home with you. Tell Scarlet that Debbie sent you and that she says, "Hey!" 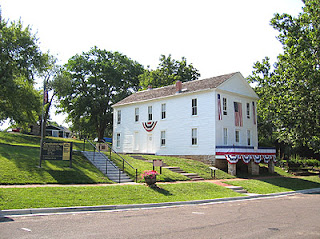 . . . . at the Kansas Museum today but Tom was abed with the flu or some derivative thereof. I went in his place for a while. Bill Kurtis and Michelle Martin were there with the new cookbook and had lots of folks in line to get it. Ran into bunches of folks--Tim Rues, Paul Bahnmaier, Ed Hoover, Howard Duncan, and Charlene Winter from the Lecompton Reenactors. Lecompton is in the running for one of the 8 Wonders of Kansas. Go to http://www.8wonders.org/opening.cfm to cast your vote. Voting will be going on until December 31st, and Governor Sebelius will announce the winners on Kansas Day (January 29).
__________________________________________
Lulu between the lemons and the carrots at Scarlet's Produce Market. 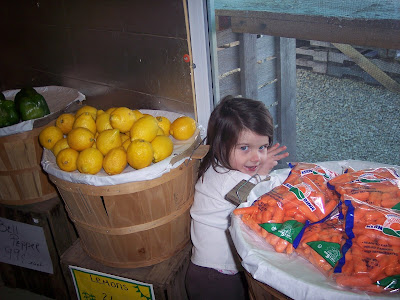 'Tis the season! I've been seeing Christmas trees on top of cars for a week! More pleasant than the dead deer in the pickup beds!

Leslie, you are so right! I miss home so much this time of year. Just walking through the woods, gathering pine cones, running cedar, breaking ivy, looking for mistletoe, which does not grow here. Nope, not much kissing in Kansas!