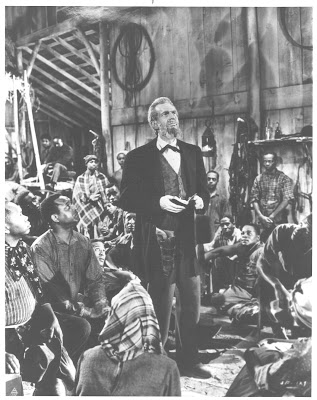 On December 2, 1859, John Brown was hanged for committing treason against the Commonwealth of Virginia. The best account of this comes from my husband, from the prologue to War to the Knife:
He was old for his day. His long white beard and deeply furrowed face readily revealed a life far beyond its prime. A man his age looked strangely out of place here in the field among so much youth and vitality. A man his age should have been rocking away this winter's morn by a warm fireplace, enjoying his last days with a grandson on one knee and a granddaughter on the other. Instead, the old man was being hauled in the back of an open freight wagon through a stubble field in Virginia. The seat beneath him was a rude wooden coffin.
All was silent now. The buzzing and laughter of the soldiers, the shouting and commands of the officers that had filled the air this morning, had suddenly ceased. Among the waiting hundreds, anxious eyes were now focused on the wagon and the gaunt figure in black as they approached. With quiet surprise, the man in the rumbling wagon looked up and scanned the scene surrounding him.
"I was very near the old man," a reporter for the New York Tribune wrote, "and scrutinized him closely."
He seemed to take in the whole scene at a glance, and he straightened himself up proudly, as if to set to the soldiers an example of a soldier's courage. The only motion he made, beyond a swaying to and fro of his body, was . . . [a] patting of his knees with his hands . . . As he came upon an eminence . . . he cast his eyes over the beautiful landscape and followed the windings of the Blue Ridge Mountains in the distance. He looked up earnestly at the sun and sky, and all about, and then remarked, "This is a beautiful country."
The old man's eyes returned to earth. Looming just ahead, the great, grim monster stood ready to receive him. The old man's million-mile wander of fifty-nine years was now but a footfall and a heartbeat from journey's end. A rogue's death on the gallows awaited. Most men, old or young, might have trembled at the sight; most men might have bowed down in terror at the fate awaiting them. The old man was not like most men, however, and far from being afraid, he would not have traded places with anyone in the world. As he well knew, he was bound for God -- and Glory. His final battle in the Army of the Lord was being waged, and victory was within reach. He would not disappoint either himself or his Maker.
At last the wagon drew up beside the scaffold and halted. Two men quickly moved forward to help the old man down. Gazing up the steps at the platform momentarily, the victim did not hesitate, but led the way in his bright red slippers "as calmly and quietly as if he had been going to his dinner," noted a young soldier nearby.
"There is no faltering in his step," another witness added when the old man reached the top, "But firmly and erect he stands amid the almost breathless lines of soldiery that surround him. With a graceful motion of his pinioned right arm he takes the slouched hat from his head and carelessly casts it upon the platform by his side."

Recorded another spectator to the drama:
He stood upon the scaffold but a short time . . . when . . . the white cap [was] drawn over his face, the noose adjusted and attached to the hook above, and he was moved, blindfolded, a few steps forward. It was curious to note how the instincts of nature operated to make him careful in putting out his feet, as if afraid he would walk off the scaffold. The man who stood unblenched on the brink of eternity was afraid of falling a few feet to the ground! Everything was now in readiness. The sheriff asked the prisoner if he should give him a private signal before the fatal moment. He replied, in a voice that sounded to me unnaturally natural . . . that it did not matter to him, if only they would not keep him too long waiting. . . . I was close to him, and watched him narrowly to see if I could detect any signs of shrinking or trembling in his person, but there was none. Once I thought I saw his knees tremble, but it was only the wind blowing his loose trousers.
At length, all departed the platform except the old man and the sheriff. 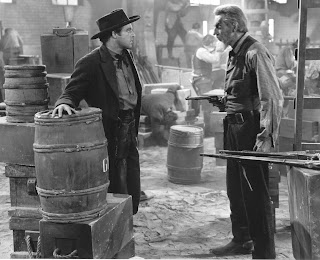 While the military companies marched and countermarched into final positions, others stared in awe as the victim stood quietly on the trapdoor with a hood over his head and a noose around his neck. Among those who watched was another old man, one with long white hair, who was destined to fire the first cannon shot of the coming conflagration a year and a half hence. Also on the field this day was a handsome young actor whose pistol report at Ford's theater would prove the last and most tragic bullet fired of the war. These two men and scores of others around them, who had cut slivers from the gallows as souvenirs, knew that they were now a part of history in the making--that something mighty was about to occur over which they would have no more control than would a reed against the wind.
When all was in place, a signal was given, and the sheriff descended the steps. Reaching for a sharp hatchet nearby, the officer glanced up at the old man one last time. As before, the prisoner stood patiently waiting, not a trace of fear visible even though he was for the first time in his long life completely alone. Gripping the hatchet firmly, the sheriff eyed the rope that held the trapdoor. Then, with one swift motion, the blade flashed forward. With a loud screech, the trapdoor opened, and the old man in black came down with a sickening thud. The rough rope dug viciously into his neck--his face quickly distorted into a horrible purple grimace and the eyes bulged hideously from their sockets.
"There was but one spasmodic effort of the hands to clutch at the neck," a horrified eyewitness said, "but for nearly five minutes the limbs jerked and quivered. He seemed to retain an extraordinary hold upon life. One who has seen numbers of men hung before, told me he had never seen so hard a struggle."
"He did not die easily," remarked another onlooker. "The animal heat remained in his body . . . long."
The minutes passed. The drama in the field continued as the stunned spectators stared in silence at the struggle between life and death. Eventually, the spasms and shudders grew less violent, then ceased altogether, and the body was at last at peace. "Not a sound was heard," a spellbound viewer remembered, "except the creaking of the timbers of the scaffold and the whipping sound of the wind, as it played with the naked branches of the trees."
And so it was. The old man was no more. His end was also the final chapter in another story, a story which he had a large hand in writing. Like his life and death, the story is a violent one to relate--a story about blood and fire and war and how Americans learned to hate and kill each other. The old man was dead now, and nothing could start his feverish pulse pounding again. Of that, most on the field this day were heartily relieved, and some felt that for his terrible sins, he should and indeed would burn in hell forever and ever. Others though, beyond Virginia, beyond even America, believed that the old man's spirit had taken wings when his body had fallen, and his soul was now soaring upward to a greater and grander glory.
[T]he man of strong and bloody hand, of fierce passions, of iron will, of wonderful vicissitudes . . . the man execrated and lauded, damned and prayed for, the man who in his motives, his means, his plans and his successes, must ever be a wonder, a puzzle and a mystery. John Brown was hanging between heaven and earth. 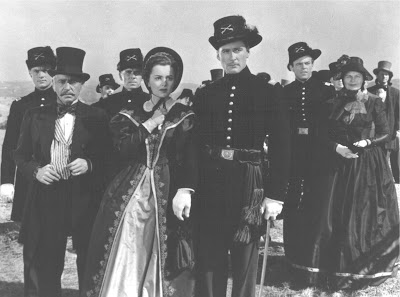 (Photos from the movie Santa Fe Trail. Top, Raymond Massey as John Brown leading slaves to freedom; middle, a scene during the fight inside the engine house at Harpers Ferry; bottom, witnesses to the hanging, including Ronald Reagan, Olivia de Havilland and Errol Flynn as George Custer, Mrs. Stuart, and Jeb Stuart.)
Posted by Deb Goodrich at 11:07 AM

Hey Deb,
Doesn't Raymond Massey give a tour de force performance as John Brown. I think of all the Lincoln films he also is the best Lincoln that has ever been on screen! I think the casting of Errol Flynn as JEB Stuart (swoon!) was first rate. I never would have known about Santa Fe Trail had it not been for you and that afternoon I spent on the couch in front of your fireplace typing up that transcript of the fireside fortune telling with "old sit in the mudd"! Even thought the history is just rotten at times in this film it is such a great movie!
Great to see you the other day!