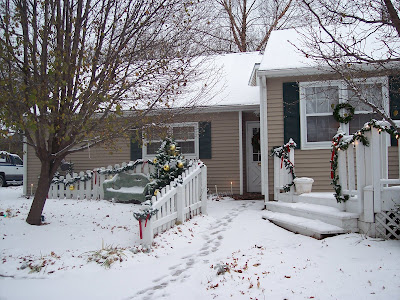 Yes, those are mailman tracks. Yes, I finally shoveled the sidewalk about 6 o'clock last evening. . . .

I was up a little after 6 as usual, and had Noel to school by 7. The main roads are okay, but our sideroads never get scraped or salted, and the snow and ice just pack over the winter months. Being as this is flat land, school is never cancelled. 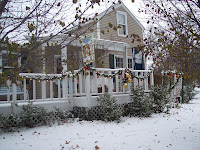 Folks just careen into the parking lot and push their parka-ed youngsters out into the blizzard-like conditions. How unlike home. From today's Mount Airy News, and this is verbatim:

The National Weather Service has issued a severe weather advisory for Surry County and parts of southwest Virginia. The advisory, which remains in effect until 9 a.m., calls for the possibility of freezing rain and sleet. That could result in icy spots, especially on bridges and overpasses through mid-morning for Surry, Carroll, Grayson and Patrick counties in Virginia. In higher elevations, freezing precipitation could result in slippery roads and limited visibility.

The severe weather prompted Patrick and Yadkin County schools this morning to delay classes for two hours. For more on this story and other local news, check our Web site, www.mtairynews.com, throughout the day, or pick up a copy of Saturday's The Mount Airy News. 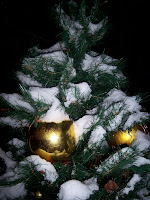 Note that the mere "possibility" of inclement weather caused a delay in schools' opening. My neighbors here think this is ludicrous. We have plenty of snow back home, so most people do know how to drive. However, we also have mountainous, narrow roads, plenty of hills, lots of trees to shade slick spots. I rather think the response to the weather harkens back to our ancestors who settled the mountains. To say that were not industrious would be outright wrong; but, they kept their own time, their own counsel. They were fatalists. If the weather turned bad, it was meant for them to stay home. I knew one lady who took this to such lengths that if she began to bake a cake and found she was out of eggs, she put the other ingredients away and determined, "it just wasn't meant for me to make a cake today."

Mountain people also possess an inate, inherent and incurable distrust of the government--any and all government. While residents of other areas of the country trust that "authorities" will insure our safety and make highways passable, mountain people harbor no such false hopes. Nope, if you can't clear the road yourself best to stay home.

I still struggle with those thoughts when I get out on the icy roads before daylight in a land where my neighbors seem oblvious to the peril before us. There are times when it just wasn't meant for us to challenge Mother Nature. 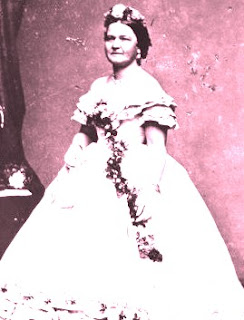 The Mary Lincoln Society, a newly formed group of local women interested in Mary Todd Lincoln, is seeking new members. The group will follow Mary’s life with talks about social, community, economic and political issues that affected her during her life. Lively discussion, guest speakers and fun will accompany these topics. The first meeting will be held sometime in January. There is no fee to join. Those interested may call 525-1825 or visit Tinsley Dry Goods, 209 S. Sixth St., Springfield, Illinois, during December to register. ___________________________________________
First Friday Artwalk

. . . . tonight in Topeka and your town, too. Take advantage of the talent, companionship, and refreshments in your own neighborhood.
Posted by Deb Goodrich at 10:45 AM

You're right; knowing how to drive also includes knowing when NOT to do it!