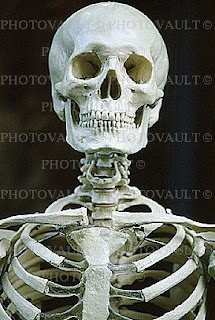 Lots of folks are looking for ways to pick up some extra money as the Christmas bills come due. Here's an idea that might not have occurred to you: a skull with teeth intact brings $1,200 while a mere humerus will get you $125. Bones are big business.
I came across an interesting article by Scott Carney in Wired Magazine--"Inside India's Underground Trade in Human Remains" (www.wired.com). This is an incredible story. Apparently, most of the skeletons used in medical schools traditionally came from India until about 20 years ago when that government banned the export of human remains. America turned to Eastern Europe and China, according to Carney, but their skeletons were inferior (mostly because they haven't been at it so long). Looking to fill the profitable void, a black market in bones boomed in India where they have been at it a while and know what they're doing.

So where do Indian entrepreneurs come up with these skeletons? Simple. They rob graves.

Carney ventured into the countryside to investigate a particular bone peddler and exactly how he found bodies and prepared them. The grisly story becomes grislier when Carney describes the process for getting clean, white bones: 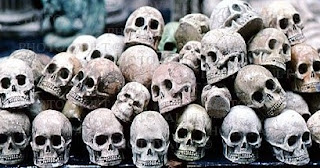 "First the corpses were wrapped in netting and anchored in the river, where bacteria and fish reduced a body to a loose pile of bones and mush in a week or so. The crew then scrubbed the bones and boiled them in a cauldron of water and caustic soda to dissolve any remaining flesh. That left the calcium surfaces with a yellow tint. To bring them up to medical white, bones were then left in sunlight for a week before being soaked in hydrochloric acid."

Topeka had its own grave-robbing, medical school scandal about a hundred years ago. A grieving widower went to Mount Calvary Cemetery to visit his wife's grave, only to find it had been disturbed. It was discovered that this had been the most recent of a series of grave robberies perpetrated by the medical school, then located downtown. Mobs gathered and the National Guard was dispatched to keep the angry citizens from burning the building to the ground.

Have been on the phone off and on with Cheryl all morning. We have a mutual friend who has been trying to get to Topeka from Denver for 2 or 3 days now. 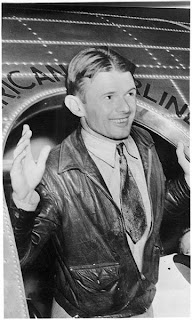 (Wrong Way Corrigan, above, earned his moniker when he was flying from NYC to Long Beach, California, and wound up in Ireland. Brilliant!)
Posted by Deb Goodrich at 8:56 AM

Grave-robbing has a long history; I'm fascinated by this aspect, which I didn't know before!