Today's Topeka Capital Journal features a list of Distinguished Kansans for 2007, and prominent on that list is Lt. Gen. David Petraeus (left).

The article by Steve Fry quotes our bud, Ed Kennedy. Rarely do I get the opportunity to send kudos to so many folks I know--Ed, David, Steve, and the General. I include the article here:

Kennedy (right below, with a portrait of Robert E. Lee at the Command and General Staff College) didn't know Petraeus at West Point or when the two were students at the elementary school at Cornwall on Hudson, N.Y. 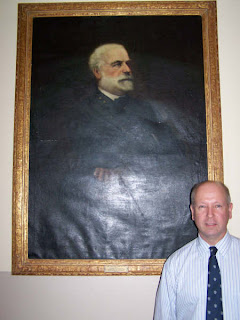 But he has learned that Petraeus, now the American senior commander in the Iraq war, defines "leadership."

After Kennedy's son, David, a West Point cadet, had surgery, there was a possibility he'd be released from the academy. When David contacted Petraeus, the general met with the cadet for several hours, then wrote a letter of recommendation on his behalf.
David remained at West Point.

"If General Petraeus hadn't written that letter, he would have been put out," Ed Kennedy said of his son, who will graduate from West Point in May.

Petraeus "is very attuned to taking care of his subordinates," Kennedy said. "That's what leadership is all about. A lot of people talk about it. He does it."

Petraeus, 55, is a former commanding general of the U.S. Army Combined Arms Center at Fort Leavenworth. He was a student in 1982 and 1983 at the fort's Command and General Staff College. Petraeus, who was commanding general of the 101st Airborne division during the 2003 invasion of Iraq, led the rewriting of the military's counterinsurgency doctrine, which, along with an increase in troops, had the goal of stabilizing Iraq.

I visited Ed's class a few weeks ago and shared some of my media experience with the officers. Earlier this month, I received a letter from Col. Robert Burns, CTAC Director:

I wish to express my sincere appreciation for your continued close affiliation with the US Army Command and General Staff College. Your frequent professional assistance with instructional matters with both the students and the faculty are beneficial and rewarding. . . .

Little do they realize how much I learn with every visit, how satisfied I feel when my experience benefits these officers, and just how much fun it is. Having the opportunity to hang out with instructors like Ed, to talk with leaders like Petraeus, and to witness the quality of officers the Army is producing--I am a fortunate, fortunate person!
__________________________________________
Speaking of Distinguished Soldiers 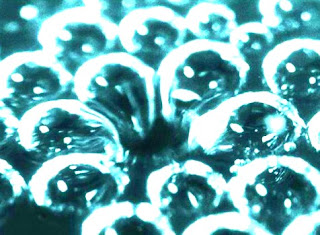 Our friends Dave and Teresa Chuber are on their way from Fort Leonard Wood, Missouri. Dave retired from Fort Leavenworth and is the historian at the U. S. Army Chemical School. He is also more like me than my real brother--short and full of bull--and thus most folks assume we're related. His son, Will, a captain stationed at Fort Riley, will come over as well.

Tomorrow evening, we hope to spend New Year's with our buds Maj. Mona Jibril and Col. Mark Neuse. Mona said we should bring our suitcases so that we can walk out the door carrying them at the stroke of midnight. This insures we'll be traveling in the coming year. In the other hand, we'll have a flute of champagne which insures there will be bubbles in our future.

Bubbles to you all!
Posted by Deb Goodrich at 10:59 AM