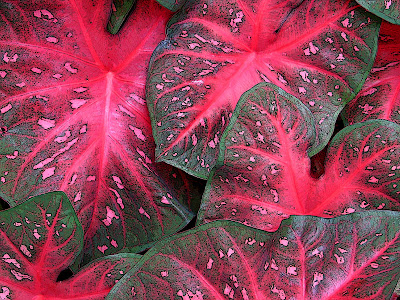 I brought the caladiums in. And the tropical hibiscus, and asparagus fern, and a pot with dahlias and a couple of plants I cannot name. I clipped the begonias and made an arrangement in a clear bowl where I hope they root. Likewise, the 20 or 30 feet of bright green trailing sweet potato vine has been cut back to about six and is now winding around the kitchen window. I could not bear to see them die. The rich, red caladiums I had planned to just store in the basement, but when I dug them up, I was seduced and repotted them instead. The caladium comes from the Amazon jungles originally, and that's what our house is beginning to resemble. Perhaps I can maintain the glorious foliage through the Kansas winter. 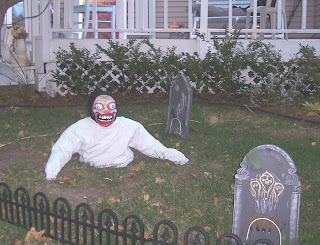 So many trick-or-treaters I thought I would be forced to give them home accessories like lamps or artificial flowers. As Noel and I ran into Dillon's Grocery Store for candy yesterday afternoon, employees were busily taking down the Halloween displays and replacing them with Christmas wreaths, ornaments, candles--you get the picture. Black, orange and purple displaced by red, green, gold and silver. It's an amazing thing to watch the transformation. Which reminds me, if you haven't seen Tim Burton's masterpiece, Nightmare Before Christmas is returning to theaters. I highly recommend it. (The nightmare in our front yard, left.) 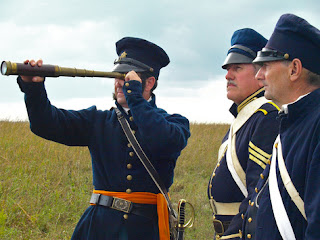 Michelle Martin took this photo at the recent living history event at Fort Scott NHS, Kansas. On the left we have Capt. Benjamin Moore and Surgeon Mott (far right) in 1843 surveying the land that will become Fort Scott. See more of these amazing photos at http://spotted.morningsun.net/pages/gallery.php?gallery=335733 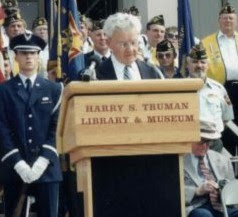 Paul Tibbets, the pilot who dropped the first atomic bomb, has died. Born in 1915, Tibbets rose to the rank of Brigadier General in the Air Force. His role in the bombing of Japan was controversial, though he remained unapologetic, and according to news reports, he requested than no funeral be held and no marker placed at his grave. He did not want to give protesters a place to gather. An AOL story on his death prompted more than 4,000 comments today. At left, Tibbets speaking at the Harry Truman Library and Museum in Independence, Missouri.

The photo of the caladiums at the top of the page was taken by Coleen Perilloux Landry of Louisiana. See more of her work at: http://www.pbase.com/septembermorn/profile

Coleen said, "Photography helps one see what otherwise one would just take for granted. The PBase community is a wonderful group of people, very talented photographers, who enjoy sharing their knowledge, their time and their talents with others. Please comment and leave messages--it makes my day."

Thanks for the photo shout out on the blog Deb! The photos are from the recent filming that took place at Fort Scott NHS and at Prairie State Park. Fort Scott will have a brand spanking new film to run in their museum that gives the history of the Fort. It was a fun shoot, got to see all kinds of friends and scoundrels. With Higgy and Maki and the gang there a grand time was had by all!

Wow, what a blast from the past reading this has been! I didn't know Coach Hanner was still around; he was one of my favorite teachers (used to argue Civil War with him) when I managed to get to class! Great to hear from you and hope you make it back to the mountains of Virginia soon!