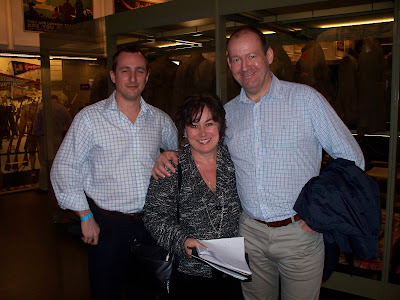 They got Deb instead.

For officers from the United Kingdom visiting Kansas, many for the first time, it was visions of flying monkeys and swirling houses that filled their imaginations. Instead, they found the pre-eminent World War Museum in the world, one offering not only the American experience, but the experience of soldiers throughout the world. That focus made an impression on more than one foreign officer. Majors Alex West and Dick Taylor, pictured above, were struck by the international scope of the displays. "If this were just America in the Great War," said Dick, "oh well." He shrugged as he said it. But because of the balanced approach in presenting the complex issues and experiences, it's meaningful for his countrymen as well. 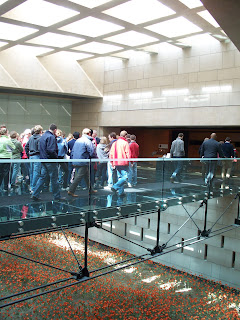 About 200 British officers visited the Command and General Staff College at Fort Leavenworth as part of an exchange program with the UK's equivalent military institution. After weeks of immersion at CGSC--after sharing ideas, doctrine, and tactics--the Brits had the opportunity to explore beyond the walls of Fort Leavenworth and visited the National World War I Museum at Liberty Memorial in Kansas City. I had the amazing opportunity to join them and "banter," as one officer phrased it. It was delightful and insightful.
Scott Porter, assistant professor and teaching team leader at CGSC, is also on the board of trustees at the museum. He commented that the museum has displayed tremendous generosity toward the CGSC students, thousands of whom have participated in classes at the facility. Significant military events are hosted by the museum as well. 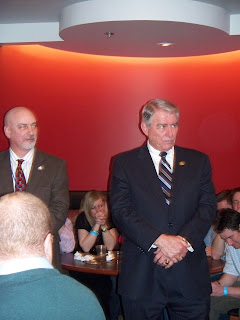 Scott is passionate about this place and its mission, and through his connection to the Command College, the ties are strengthened and the opportunities are furthered to learn the lessons of World War I. (At left, the bridge over the poppy field that leads to the museum. At right, Scott with Bob Ulin, CEO of the CGSC Foundation which hosted a reception for the officers.) 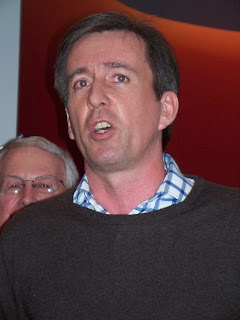 A real highlight was meeting Brigadier James Bashall, Director of the Army Division of the Joint Staff College in Shrivenham, England, (left). He eloquently commented on the mutual commitment of the US and the UK to liberty, a word that is not used often enough.

At 46, Bashall is young to be a brigadier and every officer I met eagerly asked, "Have you met our brigadier? They're obviously proud to be serving with him.

It was an incredible experience and look for more on Armchair General's website, and on this website as well.
Posted by Deb Goodrich at 8:22 AM