Another link to the past flattened. . .

Josephine Marcus Earp, a nice-Jewish-girl-turned-actress, was the last wife of Wild West lawman, Wyatt Earp. She died on December 19, 1944. Born in 1861 in Brooklyn, Josie's lifetime was witness to an incredible era of American history.

I can't quote the source (but I'm sure George Laughead can), one of Wyatt's nieces or nephews commented after his death, and I am paraphrasing, "They say Uncle Wyatt was a cold-blooded murderer but he was married to that woman for 50 years."

That woman was something, and she and I share the same birthday (month and day, anyhow) April 8.
Fellow bloggers (and folks who find the dead fascinating) are reporting from LaLaLAND that the home in which Josie Earp died has been torn down.

LAmorguefiles.com is a very interesting blog. I highly recommend it. 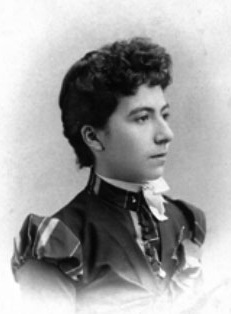 A toast to the life of an incredible woman, Josephine Marcus (Sometimes Sadie) Earp.
Posted by Deb Goodrich at 11:02 PM