My Uncle Estel Coleson died yesterday morning. He just stopped breathing. He was at home, in the country outside of Independence, Virginia. In all likelihood, you never heard of him. 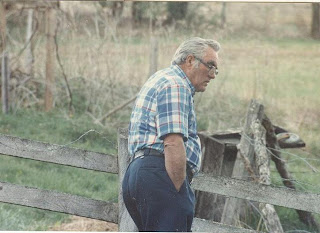 Estel (left, my sister Denise took this) was my Daddy's brother, one of eight sons and four daughters raised during the depression and depressing times. Most of Daddy's brothers looked so much alike that people who did not know them well did not know the difference. One time my mother-in-law was visiting and Estel walked in the door and she said, "Hello, Char..." She stopped mid-sentence when she realized it wasn't Charlie. I believe Estel was about four years older than Daddy.

When we were kids, it took more than an hour, nearly two, to drive from our house in Ararat, Virginia, to Estel and Vera's house near Independence. Aunt Pauline, Daddy's oldest sister, lived nearby. These were my favorite times. My cousin, Sharon, was just a year or two older than I, just enough to be interesting. We had many of the same interests -- mysteries, drama, poetry, telling stories. I remember that when President Eisenhower died, she wrote a poem and sent it to his widow, Mamie. She was in 6th or 8th grade at the time, I think. We had fun. We would all go to the New River and fish and explore. We camped. One time, there was an old house we stayed in...have no idea who it belonged to....but it was just an old house near the river. There was a wood stove and in the morning, Mama and Vera made one of the biggest breakfasts I have ever seen. I can still see everyone sitting at that table. There was sunshine, and water, sandy river bottoms, blackberries, and daisies.

Estel was diagnosed with lung cancer several years ago. He went for a couple of treatments and it made him so sick. He said he would not take another one. When he applied for disability, he was denied. Apparently, the doctor asked what he did for pain and he replied he took some aspirin and a six-pack of Budweiser.

He has lived many years past that diagnosis, meaningful years. Some days he felt bad, sometimes he struggled to breathe, but he raised gardens and played with his grandkids. Mama often remarked about Estel's ability to make things grow; he was a gifted farmer. He loved the earth, the feel of it, the smell of it. He loved walking among his vines and plants. I'm sure he must have talked to them.

Their house was so creative. Aunt Vera is an expert seamstress, and has made clothes, dolls, gifts --anything that can be made. They were always making something, growing something.

When we were kids, we would go back and forth spending days or weeks with one another. Sharon was supposed to be with us for a couple of weeks, and after a few days, Estel came to the house to pick her up early. It was a long drive and our parents did not take those trips lightly. In those days when phone calls were expensive, people just didn't call either unless someone had died. It had to be important. He came to pick her up early because he missed her. Oh, this was terrible! I wanted her to stay, and frankly, was not happy that he would come to get her before the appointed hour. There she sat, torn between us, her Dad, saying everything but please come home, we miss you, and me, begging her to stay. I was, and remain, very selfish. There was resignation when she finally said, "I guess I'll stay," just because she could not bear my profound disappointment. Estel was sad, then, but he did not stay to visit long after she said that, unusual after driving that far.

Like most of my relatives on Daddy's side, he loved to tell stories. He was funny and sarcastic. He loved to tease.

We take our turns coming into this world, and we take our turns leaving it. Uncle Estel peacefully left this world and, I'm sure, had a joyous reunion in the next with his Mama and Daddy, brothers and sisters, and grandchildren gone before. We will miss him. 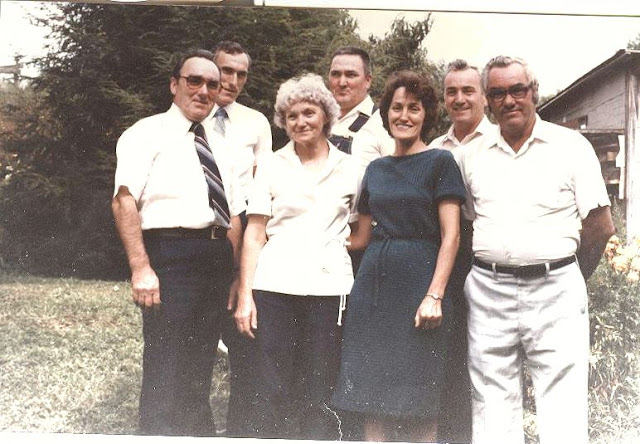 Sorry to hear of your Uncle passing. Thank you for sharing all of those wonderful memories.

Thank you, Byron. I'm sure you know some people very much like him!!