Of all the Alamo characters, none intrigues me as much as Jim Bowie. Though born in Kentucky, Jim and his brothers moved to Missouri and then to New Orleans seeking their fortunes. Among his other enterprises, Bowie traded in slaves, buying them from the pirate, Jean Lafite. He wasn't much of a home body. He gambled, brawled, caroused, drank--the kind of man a woman falls for but should never marry. Bowie was already a frontier legend when he saw opportunity for wealth and adventure in Texas. The bigger-than-life Bowie was well-suited to the bigger-than-life Texas. (Bigger-than-life also brings to mind Jason Patric (above) who played Bowie in the 2004 movie, The Alamo. Jason is the grandson of Jackie Gleason, who was probably more like Bowie in his excessive zest for life).

For all his penchant for opportunism and a lenient attitude toward the law, he was also a man of unshakable bravery, one who inspired calm and confidence in dangerous moments, a man with a strong sense of fair play, a sense of humor, a fondness even for Methodist hymns. Most of all, he carried with him an aura that attracted men to him, and that infused them with confidence that in a crisis, Bowie's side would win.

The British historian, Thomas Carlyle, said of Bowie (left), "By Hercules! The man was greater than Caesar.... The Texans ought to build him an altar."

I can't think of him without smiling.

Jim Bowie was about 40 years old when he died at the Alamo.

For an excellent essay on his life, visit http://www.tsha.utexas.edu/handbook/online/
or, Jim Bowie reenactor, Jack Edmondson at http://www.texanalivinghistory.org/edmondsonbio.html 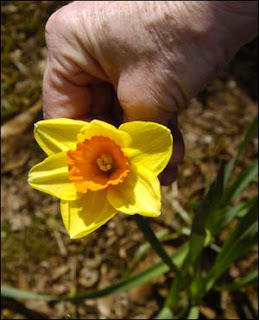 Louisiana--It's almost time for the Jonquil Jubilee in Gibsland, a hamlet in Bienville Parrish. More than a quarter of a million bulbs have been planted in the tiny town that has been named, "The Daffodil Capital of Louisiana." Historic homes in the neighborhood will also be open on March 3. Tom and I were in Gibsland a couple of years ago and can vouch for the loveliness of the community, though we were there for more gruesome reasons. There is a monument several miles south to mark the spot where Bonnie and Clyde were killed as well as a museum in town devoted to their story. In other news, Virginia just apologized for slavery and Vermont is trying to secede. 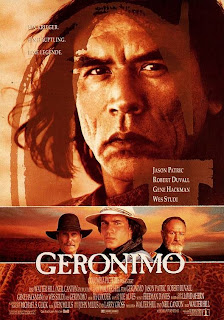 I would pay money just to watch Jason Patric peel potatoes. Tune in to the Western Channel or go to your DVD case and take out Geronimo: An American Legend. Watch it for the tenth time. Marvel at Wes Studi (What a face!!!) in the title role and Patric as Charles Gatewood. We have a friend, Ric Reed, a reenactor and wrangler from Osceola, Missouri, who worked on this movie. Apparently, there was a scene where Ric's character is standing with Robert Duvall's character, Al Sieber. They have just buried someone and Ric and Bob sing "Amazing Grace" over the grave. Sadly, that scene was cut, but it's one we would love to see.

Hallelujah Deb!
First, you are right...Jason Patric is incredible. He makes the Alamo along with Billy Bob Thornton. They are exquisite. And, as for Wes Studi. I had the chance to meet him at a conference in Texas a couple of years back-- the face of fierceness hides a very funny, gentle, kind and interesting person. He was exceptional in person. Then add to we also met Lou Diamond Phillips and he sang and picked and played in the hotel lobby until 3:00 am and was very sweet...it was the best conference I have ever been to in my life.

Don't forget though, Denis Quaid as Sam Houston (since you mention him in the other posting) was outstanding. The more and more I watch all, yes all, of Wyatt Earp...I really have grown to love his Doc Holliday as well.