Growing up in Patrick County, Virginia, the Civil War was everywhere. The cemeteries are full of veterans or the sons and daughters of veterans. My Grandpa would sit on the front porch in the evenings, while the whippoorwills 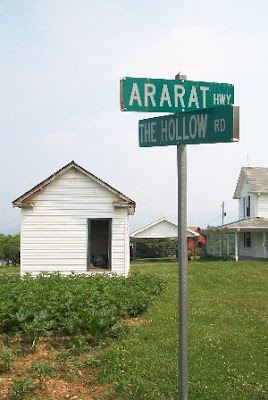 called from the willow tree, and tell me stories of his daddy and his uncles. His daddy took care of General Lee's horse one time. His uncle deserted at Harpers Ferry because his wife had been terrorized by the Home Guard. I pondered these stories, cherished them.

I lived in the Hollow, the same Hollow where Jeb Stuart first saw the light of day. Later, the Hollow Post Office merged with the Ararat Post Office, and the Hollow ceased to exist, on the maps anyhow. I went to high school in Stuart, posthumously named for our gallant native son.

I followed Jeb. For a time, I lived in Richmond, only a mile or so from Yellow Tavern where he was mortally wounded. Then I followed him to Kansas. Jeb spent most of his adult life in the Kansas Territory--married here, had children here, went to church here, fought the Indians here. The realization of the connectedness of South and West began to hit me. The men who would soon be famous--Stuart, Robert E. Lee, Lewis Armistead, John Geary, Phillip St. George Cooke, Edwin Sumner, William T. Sherman, Joe Johnston, John Brown, Horace Greeley, Abe Lincoln, Bill Cody, Jim Hickok--they all crossed paths, or avoided one another, on the Plains of the West before the Civil War began.

After the war, many who survived came West, some to conquer, some to survive.

"Trust in God, and Fear Nothing"

Few people have more tragic lives than Lewis Armistead, born this day in 1817. His heroic death at Gettysburg, his legendary friendship with Winfield Scott Hancock, these are well-known; his sad life before that may not be as familiar.

Born in North Carolina, Armistead grew up near the mountains of Virginia on the family farm, Ben Lomond, near the town of Upperville. As a cadet at West Point, he resigned after breaking a plate over the head of fellow cadet and fellow Virginian, Jubal Early. Despite this transgression, Armistead was named a Second Lieutenant and served in the Seminole Wars.

The army took him to Mexico and took him West. He had a promising career. But in the span of six years, he lost two children, two wives and the family's home in Virginia burned to the ground. I have visited the grave of his second wife at Fort Riley.

As an historian, I am asked by normal folks why I care so much about the Civil War. The short answer is, the people who lived those times, just like Stuart or Armistead, are as real to me as anyone I know. I am humbled by their ability to endure, and to persevere, and their seemingly unshakeable faith in the face of so much that would challenge it. Lew Armistead's story touches me.

In June, 1985, my grandfather was in the hospital. He was nearly 91, and we knew death was near. The Saturday he died, my father-in-law had a massive heart attack and went into a coma. That night, Grandpa passed away and though I expected it, I felt like I had been hit by a truck. On Monday, my sister was in the hospital having a baby. She had been taking care of Mama, who was having chemo that same week. (Mama would die six months later at the age of 48.) On Wednesday, my house burned down. On Thursday, I went to work and was told the newspaper would close in two weeks and I wouldn't have a job. On Saturday, my father-in-law died. A week. There was barely time to process it. I was afraid to get up and face another day for fear of what it would bring, yet I know these experiences pale in comparison to the burdens some people have to bear.

Robert E. Lee said, "I study history because it gives me hope." It has given me hope and purpose, and allowed me to know incredible and inspiring people, some living, some gone on.


(photo of the Old Hollow Post Office above courtesy of Tom Perry at freestateofpatrick.com)
Posted by Deb Goodrich at 9:51 PM