Not often, but every now and then, I do believe I was born in the wrong century. I should have been a young woman, say 20, say living in Nebraska, say in 1876, say when Buffalo Bill Cody was about 30. I would have positively, utterly shamelessly, thrown myself at him. I would also have been standing in line.

Born on February 26, 1846, near Davenport, Iowa, nobody, and I mean absolutely nobody, exemplifies America like William Frederick Cody. He was the spirit and the action and the ideal in one magnificent man. Magnificent though he was, he was also a lousy husband.

Bill and Louisa (below, with their daughters) had a rocky relationship at best. The beautiful, spirited, Italian, took one look at this hunk and thought what women have thought for ages--she would tame him. They would have a nice little business, raise kids, go to church, and be normal people. Poor Bill tried. 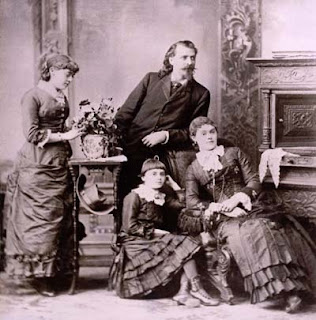 It just wasn't in him. Instead, he left Lulu at home so he could make history. Being the wife of a legend is a lonely life. Children would be born or die, and Louisa was mostly alone through it all. At one point, the couple tried to divorce and the judge would not allow it.

If hers was lonely, his life was full. As a boy, he looked on helplessly as pro-slavers mortally stabbed his father. He became a Jayhawker, a freebooting Union soldier, in part to avenge the death of his father, in part because he was drunk when he enlisted (the photo above was taken in 1865; Bill was 19 and already a combat veteran).

After the war, former Confederates were among his confidants, like Texas Jack Omohundro, a Virginian who had served with Gen. J. E. B. Stuart. Cody scouted for the U. S. Cavalry and was called the "paragon scout" by Gen. Phil Sheridan. He guzzled rot-gut whiskey in Western saloons and sipped tea with European royalty. Like George Custer, he fought Indians but counted many as his friends. 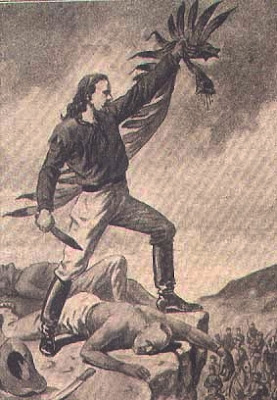 He took the "first scalp for Custer" in hand-to-hand combat with Yellow Hair in 1876 (left), and years later travelled to South Dakota to meet with his old friend, Sitting Bull, and broker some kind of peace when the Army was getting excited about the Ghost Dance. He killed thousands of buffalo to feed and make way for railroad crews...then lamented their loss. He possessed the range of experience and emotion.

I spent a summer at the Buffalo Bill Center in Cody, Wyoming, and it was among the best moments of my life. I encourage you to visit the Buffalo Bill Historical Center and then stop in at the Irma Hotel in downtown Cody, named for Bill's daughter. While there, hoist a couple at the bar. It was given to Bill by Queen Victoria. I invite you to spend some time in North Platte, Nebraska, at Cody's home, Scout's Rest. Drive through the Salt Creek Valley near Fort Leavenworth, Kansas, where Bill grew up. Hop a freight train (or just grab the Amtrak) west and gaze upon the endless landscape he knew like the back of his hand. Read his autobiography. Find a way to spend a little time with this man who introduced the rest of the world to cowboys and Indians. You'll be captivated, just as I have been. Buffalo Bill.... Despite all the hype and hysteria, Cody was the real deal.

In Lake County, Illinois, "Buffalo Bill" is literally, Buffalo Bill, a 1,000 pound bison. According to the Chicago Sun Times, James Taylor, who owns Bill, keeps him as a pet and reports that Bill does pretty much as he pleases. Pointing to a battered fence, Taylor demonstrated that Bill doesn't like being penned in. He once found the beast outside the fence butting his head against the trees. Talk about stubborn! Once, Bill tossed a 1,200 pound trough into the pond and the Taylors had to get the tractor to pull it out. "Some days he's in a good mood and some days he's a jerk," Taylor told the reporter. (I'm sure Louisa Cody would have said the same thing!)

The New Orleans Times-Picayune reports that a pedestrian named Frank James was run over and killed during Mardi Gras. I know it's a morbid thought, but wouldn't it make an interesting book to collect all the obituaries of Frank and Jesse James over the years?

Speaking of Frank and Jesse (as we often are), I stumbled over this 1860 census online and just wanted to share it with you. The first line is Reuben Samuel, Frank and Jesse's step-father and Zerelda's third husband. 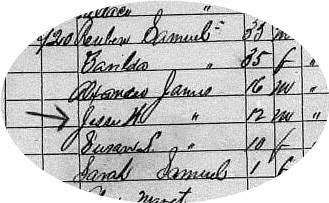 The second line is Zerelda, though I think the census taker was a little creative with the spelling; then come Alexander James (Frank); Jesse; their sister Susan, and a baby. The census indicated the family's real estate worth around $5,000 and personal property over $1,000. Quite well off for the day. There is still something exciting to me about seeing everyday records, like this census, that puts legends into the context of the real world in which they, and our ancestors, lived together. There is also something quite poignant in seeing this record, before the war, before their lives were turned irrevocably upside down...and before Frank and Jesse became world famous.

This is a subject near and dear to my heart and I have thoroughly enjoyed Irish Confederates: The Civil War's Forgotten Soldiers by Phillip Thomas Tucker. A slim volume, a quick read, this book is full of soldiers and politicians, some of whom you know, like Pat Cleburne, of course, and the meeting of the Irish Brigade and the 24th Georgia at Fredericksburg. Included is the tale of Dick Dowling, the Houston saloonkeeper who defended Sabine Pass. (Tom and I have visited the monument to Dowling on the Sabine which is one of the most impressive I've ever seen. The story bears repeating.) 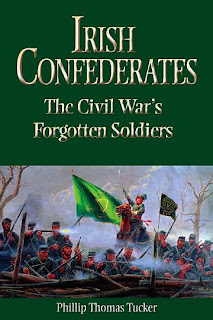 Others are lesser known, but equally compelling like the Mitchel family of South Carolina. John Mitchel was a founder of the Fenian Brotherhood in the United States. Three of his sons served in the Confederate Army: Willie was killed in Pickett's Charge; John died defending Fort Sumter in 1864; James commanded the Montgomery Guards, Irishmen from Richmond. The Mitchels believed the same ideals were at stake in this war that they had defended in their homeland.

Tucker, an accomplished historian and author, acknowledges that Irish participation in the war is generally assumed to be in the Northern units, while their former countrymen in the South are forgotten. From his introduction Tucker writes, "Irish Confederates were in general longer-term residents of America than the Irish in the North. These Southerners of Irish descent, consequently, possessed a larger stake in the American dream, in part because they had encountered less anti-Irish and anti-Catholic prejudice and more opportunity in the agricultural South than had the Irish in the large northeastern cities, such as New York, Philadelphia, and Boston. In overall terms, the Irish of the South more successfully assimilated into mainstream southern life and society. . . ."

Why did the Southern Baptist cross the road?
To fry the chicken on the other side.

Why did Sherman's bummer cross the road?
To steal the fried chicken from the Southern Baptist on the other side.
Posted by Deb Goodrich at 9:08 PM