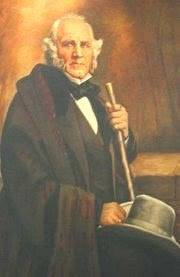 The United States Senate of the 1850s had some colorful characters, not the least of whom were Jefferson Davis and Sam Houston (left). An insightful and articulate woman, Varina Davis provides rich word portraits of the men who served alongside her husband in his "autobiography," which she wrote. (Talk about getting in the last word!) Her description of Houston, who was nearly a generation older than her husband, is priceless:

He was considerably over the ordinary height--six feet four at least. He had a noble figure and handsome face. . . . He rejoiced in a catamount* skin waistcoat; it was very long-waisted, and his coat was left ostentatiously open to show it. Another waistcoat, which he alternated with the catamount, was of a glowing scarlet cloth. His manner was very swelling and formal. When he met a lady he took a step forward, then bowed very low, and in a deep voice said, "Lady, I salute you."

It was an embarrassing kind of thing, for it was performed with the several motions of a fencing lesson. If she chanced to please him . . . he generally took a small snakeskin pouch from his pocket and pulled out from it a little wooden heart, the size of a twenty-five cent piece, and presented it with, "Lady, let me give you my heart." These hearts he whittled all day long in the Senate and he had a jeweller put a little ring in them. There was a certain free, stolid manner that suggested his long residence with the Indians.

Varina went on to recall the story Jeff had shared of meeting Houston in a sutler's store in the West, many years before. Houston had visited with Jeff at length then declared, "The future United States Senator salutes the future President."

How right Sam Houston was, though their futures, just like ours, take turns we cannot imagine.

*For you whippersnappers out there, a catamount is a mountain lion.

Look for a new whole wheat doughnut at Krispy Kreme. More fiber and 180 calories, versus 200 for an original glazed doughnut. How could they improve on the origial glazed doughnut, you might ask? Well, they can't, but for people trying to be more health-conscious, this may be the next best thing. 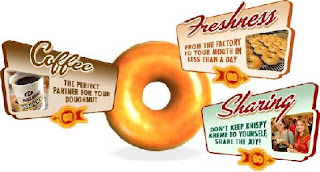 Let me add that, as Tom and I have traveled the country, we have seen more excited debate over Dunkin' Donuts v. Krispy Kreme than the folly of Pickett's charge or the debacle on the Little Bighorn. (As the outraged guest speaker one night back East, I had to wait behind the ravenously rude roundtable members for chocolate Dunkin' Donut holes, which I might add, were gone by the time I got there.) Likewise, folks in Massachusetts waited in line for weeks when Krispy Kreme opened up there. Back when I was a schoolkid, Krispy Kreme had its store in Winston-Salem, North Carolina, but other than that the doughnuts were used as fundraising tools. So, if Boy Scouts or the Beta Club had to raise money, they sold Krispy Kreme doughnuts. I sold dozens at a time and could eat a dozen at a time. Let me end the Great Doughnut Wars right now by saying, Krispy Kreme is as addictive as cocaine.
Posted by Deb Goodrich at 12:55 PM