On Lincoln, and the Courting Rituals of Nerds 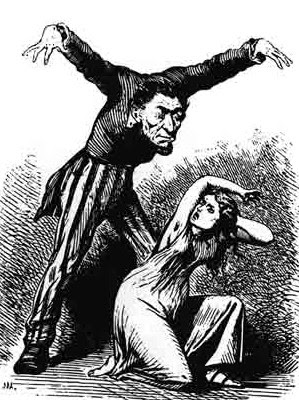 It seems that Abraham Lincoln has been again voted the most revered president in history. Up until John Wilkes Booth shot him, he was likely the most hated president. His death catapulted him to martyrdom. So I have come to believe.

Not long after we met, several years ago now, Tom brought a box of notes over to my house. He already had the title, and he already had a good start on the research. All he needed was inspiration. Then he found me.

"This is a project I think you could get excited about," he said, as he laid the box at my feet.

That was the beginning of The Day Dixie Died. It had started with a story Tom found while researching another book. A lady in the occupied South had hanged herself rather than show mourning for the fallen president. 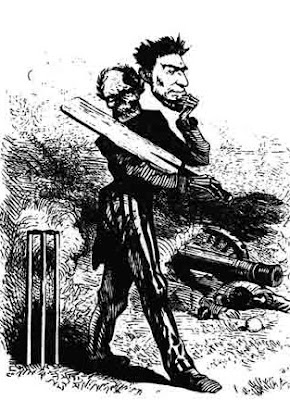 That didn't fit with what we had learned in school. Hadn't the grief for Father Abraham been deep, universal, and flooding forth like the streams from the mountains? This woman's story said, no, there is more, and we set off to find it.

For two or three years, we lived as gypsies, as our friend Carol Neumann called us, wandering from dinner venue to lunch venue to archive to library--eating free, selling books, and researching the dark aftermath of the Civil War and Lincoln's death. The evidence began to pile up--the countless folks jailed for celebrating Lincoln's death, the people killed for shouting he should have been killed four years earlier. And all this was taking place in the North.

In the South, some felt they had been delivered from their greatest enemy and that God had finally heard their prayers. Others, though, realized that this was the greatest blow yet to the fallen country. Whatever their personal feelings for Lincoln, there were thousands, North and South, who never in their wildest dreams could imagine "The Baboon" would one day be named our greatest president.

Our research took us on an incredible journey. The first time we were invited to speak to a Civil War Roundtable and then stay at the home of our host, we were pretty nervous--Scottsdale, Arizona, Wes and Sylvia Schmidt. We drove up to their home. Looked nice from the outside. They welcomed us, and we could tell, there was a little trepidation on their part as well.

That night, or the next, whenever we were slated to speak, the person who was supposed to show up at the Arizona Historical Society and open the door, didn't. There we stood, dozens of us history geeks, in the parking lot when it began to storm, and lo and behold, there was a tornado. We could almost hear the wheels grinding around us: "Hey, these Kansans brought a twister with them to Arizona!" Nonetheless, one of the CWRT members invited us back to his office to speak and I turned over the trashcan to use as a podium. Folks, maybe a hundred of them, crowded into the cubicles, sitting on desks and leaning on file cabinets to listen. It was a wonderful evening. We bade a sad farewell to Wes and Sylvia--they were gracious hosts, but we had to move on to California and more talks. And there was no end to the research on President Lincoln. . . . 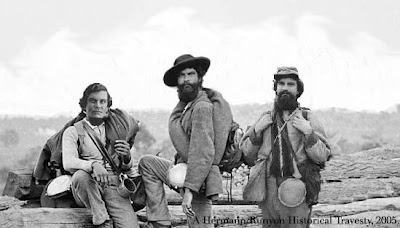 Scott Porter, from the Command and General Staff College, Fort Leavenworth, Kansas, is speaking to the Topeka Civil War Roundtable Thursday night. His research on the battle of Camden Point, Missouri, is intriguing and Scott has found the Missouri/Kansas border war chillingly relevant to the topics he is teaching his students. Next Tuesday, February 27, our friend Rob Hodge (left, center, and right--that's right...it's modern techno hocus-pocus) speaks to the Kansas City CWRT on preservation, history, and moviemaking. He and his partners just won an emmy for their documentary The Battle of Franklin. Good work, guys! 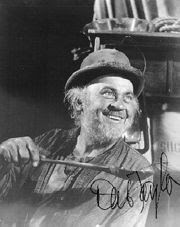 There is a documentary in the works on screen legend, Dub Taylor. Called, That Guy: The Legacy of Dub Taylor, the film is so named because people remembered Dub's face and not his name. Well, they've been talking to the wrong crowd, because I'll guarantee that everybody in our house knows his name. One of Tom's favorite movies, other than Tombstone, of course, is Bonnie and Clyde, and who can forget Dub as "Melvin," the father of C. W. Moss? But I'll always remember the Dub who was hiding under a table during a fracas in the movie The Undefeated. Trying to avoid the fight, he decided to reach up and grab vittles instead. What he came back with was a handful of "Grits!" Dub's first name was Walter, and as Southerners are wont to do, friends called him "Dubya." Now you know. Another reason for me to love Dub is the fact that he was born in Virginia (add another lustrous name to my list!) Visit the filmakers website at http://thatdub.com/
Posted by Deb Goodrich at 9:20 PM

Can I use your credit card? Thanks, and keep the cards and letters coming!

I'm thrilled that you and your family knows Dub's name. Hopefully by the end of production, the whole country will! Anyway, I enjoyed reading your recollection.

James, We're just thrilled you're doing this film on Dub! His life brought so much joy into the world. Keep us posted because we can't wait to see it!