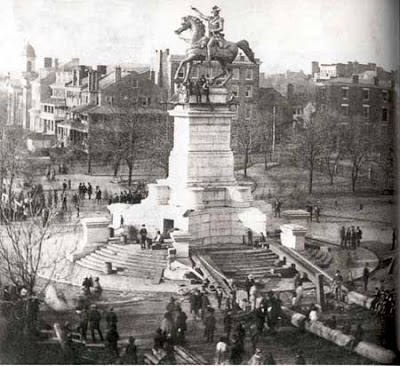 This is a holy day in the annals of Virginia history--the birthday of the father of our country. Both countries, if you read your Confederate history.

In this month of Lincoln mania, the name of his fellow Kentuckian, Jefferson Davis, uncomfortably pops up every now and then. Would Lincoln have been as great without Davis? (Now there's a question for Brian Dirck!).

The first and only president of the Confederate States of America, Davis held his second, yes second, inaugural on this day in 1862, in the shadow of Washington's equestrian statue in Richmond (above). The new nation wanted everyone to get the point--the Confederacy was carrying on the ideals of the American Revolution, not the Yankees in the North. Having been installed in Montgomery as the "provisional president," Davis was now the elected and bonafide leader of the fledgling nation.

It was a miserable day. There was a cold, cold rain and Confederate reversals filled the news. Fort Donelson had fallen. Nashville had been captured. The glories and victories of the first days were fading memories as grim reports rolled in. 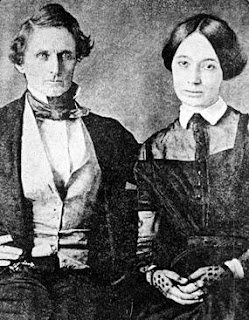 In the Confederate White House, Varina Davis (left, with her husband on their wedding day), rushed to join the ceremony. A carriage had been dispatched to take her to the square, a short ride. She looked out the coach windows and saw black men with black suits and white gloves walking along beside her. When asked who they were, the driver responded, "Pallbearers." Varina was informed they were normally used for funerals and important events. She dismissed them. This whole day was depressing enough without the escort of pallbearers! 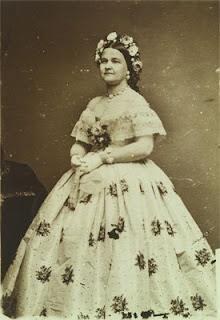 I have been working on a book on Varina Davis and Mary Lincoln (right) for several years. The boxes of notes pile up in my office, the manuscript is written, trashed, and rewritten. I keep plugging, and eventually a book will emerge.

Virginia has opted out of celebrating the bicentennial of the birth of Abraham Lincoln. Declining to appoint a committee to observe the festivities in 2009, one legislator commented, "He wasn't a Virginian." This decision has created quite the stir, but come on people. Virginia is in the midst of its 400th birthday, there is a national Lincoln celebration planned, and because the nation's capitol is smack dab next to the Old Dominion, Virginians will be well-represented. (I do wonder though, if this means they'll be taking the Virginia flag out of Lincoln's tomb at Springfield?)
___________________________________________
Email

Deb-
I absolutely love both blogs. Keep up the awesome writing. I understand the work involved in maintaining a daily blog. My 5 year old son has a blog that he posts to daily (well, he dictates and I type and post), but it's quite the job. I appreciate the time you and Tom take every day to write. Your writings are truly a respite from present day stress. I read several newspapers every day and its nice to kick back and read your blogs.
By the way, if you get a second and need a laugh, you can find my son's blog at http://www.thedinosaurboy.com.
Clint, Tooele, UT 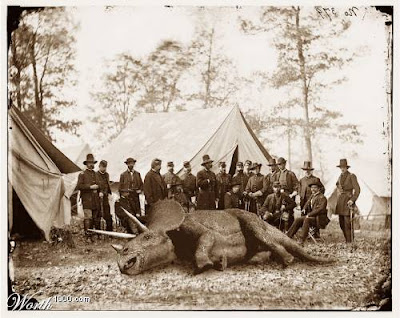 In a brilliant plan of attack, use of the Confederate secret weapon had been thwarted.
(Thanks to Mike Epstein and Blair Tarr )
Posted by Deb Goodrich at 8:47 AM

Thank you for this picture. I will put it on my blog tonight. It looks like those are doctors helping that hurt triceratops.

I was just browsing your blog from the beginning and noticed this post mentioning Varina Davis. I have this same wedding picture enlarged in an 8x10 and framed hanging in my office. Mrs. Davis was only 18 years old when this picture was taken (17 years younger than Jefferson Davis.) I've always found her to be very attractive, but in this picture Ol' J.D. looks ticked off and she looks like she just wants to get the picture over with. I've often wondered what the circumstances were at the time this was taken.

Byron--the book is coming slowly. We're working on one on Mary Lincoln & Varina, as well as one on Jeff Davis's flight and imprisonment. Life keeps getting in the way! I wish I knew more about the circumstances when the photo was taken. I know that Jeff could be full of himself at times, and this looks like it may have been one of those. Varina looks demure, perhaps even passive, and in reality, she was quite outspoken. It made for a difficult marriage. I must get back to that book. . . .