This might be Kansas Gov. Sam Crawford and his wife Isabel, circa 1865, or it might be Mr. and Mrs. John Speer. Speer was a newspaper editor during Quantrill's raid on Lawrence, Kansas, in 1863. Two of his sons were killed in the massacre. 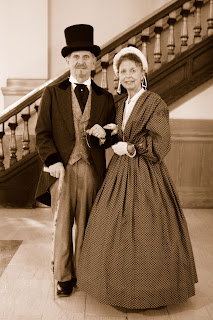 Or it might simply be Herschel and Jacque Stroud.

Shelby Puckett, who lives back home in Ararat, Virginia, commented when I was visiting that she and husband, Raleigh, were at Andersonville Prison NHS and they ran into someone that knew Tom and me.

"It was Herschel and Jacque Stroud," I said without blinking.

"Because," I replied, "They're everywhere."
Herschel and Jacque live just a couple of blocks from us, but do we ever see them strolling the neighborhood? No. Never. Since Herschel retired from the dentistry, these two are on the road non-stop recreating some Civil War figure and generally fighting ignorance of American history. They have spoken from coast to coast, delivered papers, attended conferences, entertained and enlightened. They are pictured at left, with the 8th Kansas decorating graves on Memorial Day. Two years ago, Gov. Kathleen Sebelius appointed Herschel to be the Kansas liasion with the National Abraham Lincoln Bicentennial Commission. I can't think of a better emissary.

This pair was destined to be together and you can't speak one name without the other. They were also destined to be historians. They met on a blind date at the Eldridge Hotel in Lawrence, the same hotel destroyed by Quantrill. The headquarters for abolitionism in Kansas, some folks consider this corner of Massachusetts Street to be the most historic spot in the state. During the first three years of their marriage, the Strouds lived within blocks of the Chicago Historical Society which housed a multitude of Lincoln and Civil War items.

Yesterday, Jacque sent me her Civil War Gingersnap recipe and I can say from experience, they are delicious!

Beat the first 5 ingredients together.
Measure, sift and add the remaining ingredients.
Chill overnight, or for several hours.
Roll batter in sugar into little balls and press half flat.
Bake on a greased cookie sheet 10 to 12 minutes.
Do not overbake.

Also, she goes heavy on spices and lemon
flavoring. 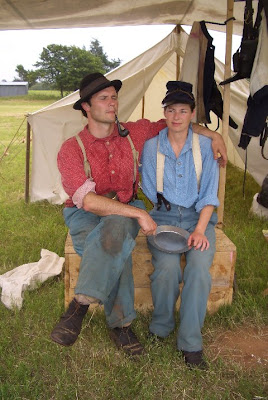 Herschel sent me this photograph of our buds Jon and Betsey Goering--another couple destined for one another and for the history books. Find out more at thefreestaters.com and give a listen to their band tomorrow (August 11) at the Watkins Museum in Lawrence, Kansas.

. . . . to Jimmy Dean, born Seth Ward on this day in 1928, near Plainview, Texas. Dean's mother, who was the family's only provider, ran a barber shop and as a boy, he picked cotton and worked on local farms. 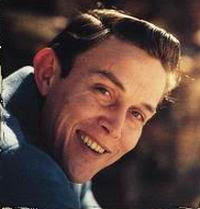 His mother taught him to play the piano when he was 10 years old and he taught himself guitar, accordion and harmonica as soon as he had access to the instruments. At 16, he began to study engineering but then joined the Merchant Marines for two years, after which he enlisted in the Air Force. It was during his service that Dean first became an entertainer when, with a band called the Tennessee Haymakers, he played local clubs and honkytonks near his base. Most kids will recognize him these days because of "Jimmy Dean Sausage" but I still love listening to "Big, Bad, John," Dean's crossover hit record about an heroic coal miner.
Posted by Deb Goodrich at 10:08 PM