Was just on the phone with our buddy Rob Hodge last night. He and the Wide Awake crew have been filming down at Wilson's Creek National Battlefield, and historian Ed Bearrs has been along providing the narrative. Today they are headed to Carthage, Newtonia, and the Bushwhacker Museum in Nevada.
I asked Rob if he knows Pat Brophy. 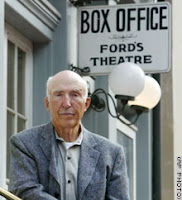 Well, says I, he's the potentate at the Bushwhacker museum. He's a character. I'm not sure about his health, but I hope you get to visit. If he and Ed Bearrs end up in the same room, it might spontaneously combust. Then I instructed Rob to tell Ed that Tom and Deb, his fans in Topeka, hope to see him soon. I'll never forget the expression on Tom's face when a mutual acquaintance said that he and Ed had been discussing one of Tom's books. "I like the way he writes!" Ed had thundered. It didn't matter if he said it about every author, every book. Praise from the dean of American historians is rich. Tom savored it.
Rob treasures this time with Ed. Filming the former chief historian for the National Park Service in these historic settings, preserving for new generations not only the knowledge of history but the passion for history is a privilege. We mentioned the names of Brian Pohanka and Jerry Russell. Rob was close to Brian and I adored Jerry. I thought he looked like Donald Sutherland (He loved that!). What those men did for the preservation community, for the furtherance of history, cannot be overstated. And as Rob aptly said, who will fill their shoes? And when Ed is gone, who will fill his shoes?

In a few days, Rob is headed to Harpers Ferry to take part in the candlelight vigil for battlefield preservation. Our thoughts will be with him and all the activists taking part. The situation on this hallowed ground is absolutely scandalous!!!! From the Civil War Preservation Trust (please read and lend your support):

One year ago next week, the preservation community was stunned by the unauthorized bulldozing of protected battlefield land at Harpers Ferry National Historical Park (NHP). During the weekend of August 19-20, 2006, a consortium of local developers arrogantly dug an enormous 1,900-foot trench on National Park Service (NPS) property on historic School House Ridge, then proceeded to lay a water and sewer line without a permit or permission from NPS. The response to the unauthorized bulldozing was immediate and impassioned. Thousands of Civil War Preservation Trust (CWPT) members signed petitions urging the Department of the Interior to take action against the perpetrators of this outrage. We were joined by other national and local groups who expressed dismay at these events. And we waited patiently for the federal government to stand up and protect land we had worked so hard to preserve for future generations. Now, one year later, the time has come to renew our call for action to ensure what happened at Harpers Ferry in 2006 cannot happen again.

WHAT: Candlelight Vigil and Remembrance at Harpers Ferry NHP
WHEN: Friday, August 17, 2007, at 6:30 p.m.
WHERE: Perry Orchard Property, Harpers Ferry NHP, near the intersection of Routes 27 and 340, Jefferson County, W.Va.

I hope you can attend - to show that the preservation community remains outraged and frustrated that a handful of individuals could wantonly and defiantly destroy America's heritage. If you have any questions contact CWPT at 1-800-298-7878. 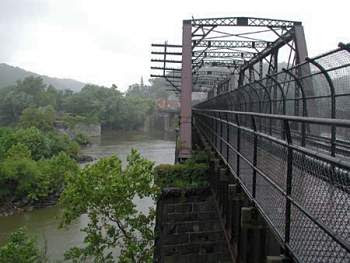 Photo of Harpers Ferry from the Maryland side. www.civilwaralbum.com