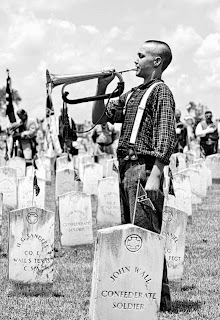 A somber and surreal ceremony took place in Mobile, Alabama, over the weekend. A Confederate sailor was laid to rest--a sailor who died off the coast of France in 1864. His body was encrusted on the underside of a cannon discovered in the wreckage of the C. S. S. Alabama. The famed Confederate privateer was sunk by the U. S. S. Kearsage in the English Channel and most of the 120-man crew were rescued. About a dozen were never found. A French diver searching for mines found the shipwreck, about 200 feet down, in the 1990s and since then about 400 artifacts have been discovered by French and American divers.

The sailor's remains have not been identified, though I have heard that DNA tests may be used in an effort to determine who he is.
Saturday's funeral procession began downtown at the site of the statue of Adm. Raphael Semmes, who was the commanding officer of the CSS Alabama, and ended at Magnolia Cemetery where the sailor was buried. 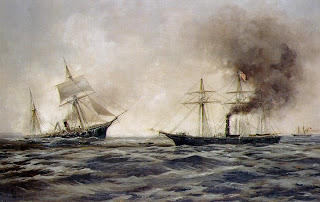 The sailor's remains were placed in a handmade wooden coffin pulled by a horse-drawn caisson, accompanied by members of the Sons of Confederate Veterans.

This is a sad day in the history of the Sunflower State, for on this day in 1876, Colorado joined the Union. Oh, woe is me!!!
Until Colorado achieved territorial status, then official statehood, Kansas had silver mines and mountains.

Yes, the western boundary of Kansas extended to the Continental Divide. Imagine how different our state would be today. Denver would be our largest city. Advertising would say, "SKI KANSAS!" Folks back East could say, "We're going to Kansas for our vacation" and no one would laugh.
When crossing the river at Kansas City, one would be greeted by signs that read "Entering Kolorful Kansas" instead of "Welcome to Kansas . . . Home of Bureaucracy". . . Colorado Springs, Colorado, would now be Kansas Springs, Kansas . . . and instead of the five or six hour drive across our fair state, it would take 7 or 8. Oh, never mind. I guess that's a good thing.

But no, in the first great blunder by our legislature (even as they were creating Kansas), our august body of legislators decided that the mountains were too far away, too full of Democrats, too much trouble to govern, too much to think about at the moment--and they just gave them away.

Pardon me if I appear bitter. 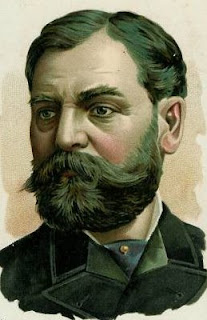 The much maligned, misunderstood Robert Todd Lincoln was born this day in 1843. Still I give talks and people come to me afterwards talking about how this ungrateful son had his mother committed. They forget how he lost a father that he never had the opportunity to be close to, lost younger brothers he had protected, tried to take care of his impossible mother, and then had issues with his own wife's instability. Robert left law school when his father died to live with his mother and Tad. It was an incredibly depressing situation. Although he succeeded in business, it seems happiness would elude him in his personal life. Robert had a tragic proximity to two other presidential assassinations, causing him to wonder if he was cursed. He is buried not far from John F. Kennedy in a secluded spot of Arlington Cemetery.
__________________________________________
BULL

From my friend, Patrice, who has been dealing with a bridge closed for repairs, and with a nod to Kansas Bureaucracy (and the good, dear friends of ours who are employed by the Kansas Department of Transportation):

A Kansas Department of Highways employee stopped at a farm and talked with an old farmer. He told the farmer, 'I need to inspect your farm for a possible new road.'

The old farmer said, 'OK, but don't go in that field.'

The Kansas Department of Highways employee said, 'I have the authority of the State of Kansas to go where I want. See this card? I am allowed to go wherever I wish on farm land.'

So the old farmer went about his farm chores. Later, he heard loud screams and saw the Department of Highways employee running for the fence and close behind was the farmer's prize bull. The bull was madder than a nest full of hornets and the bull was gaining on the employee at every step.

The old farmer called out, 'Show him your card, smart ass!!'
Posted by Deb Goodrich at 9:32 AM

LOL...I thought that was a good one too ;)I dont forward to many forwards but this one was a goodie!~Patrice