My daughter just walked in and announced that you are less likely to die in August than any other month. Interesting. We can all breathe a sigh of relief for the next three weeks. However, this prompted me to look for the month in which you are most likely to die. Well, come to find out, it depends.

If you plan to die from alcoholism, or just the plain old flu, it will likely occur in the winter. If a car wreck is your fate, avoid holiday travel when most traffic fatalities are recorded. If a heart attack is your preference, you'll likely go on a Monday (does anybody need to explain this one?) and your heart attack is more likely to happen if you're in New York City. Even visiting New York City can bring on a heart attack. (We've been telling y'all that for years!) If you are a substance abuser there's a good chance you'll go in the first week of the month when the VA sends your sack full of meds or you get your government check and buy meth. I am not making this stuff up. These are the findings of the University of California at San Diego.

When I informed my sister, the accountant, of these figures, she said we will see this trend change since social security checks have begun to go out on birthdays instead of the first of the month. Which could, in turn, affect scheduling and overtime for emergency medical teams. Bless the government for trying to stretch death over the entire month instead of crunching it all up together that first week.

We all realize there are occupations which entail more danger than others. Like being president or archduke or czar. Assassination is no problem if you're a garbage man. Sometimes, even proximity to greatness is deadly as is the case with the mayor of Chicago who was shot in Franklin Delano Roosevelt's motorcade back in the 1930s. (And let's not forget Gov. John Connolly riding with President Kennedy; fortunately, the governor survived but was struck by the same bullet that killed the president.)

Other research indicates that you're more likely to be struck by lightening in Florida, sucked away by a tornado in Kansas, dragged off by a crocodile in Louisiana, or eaten by a bear in Alaska. 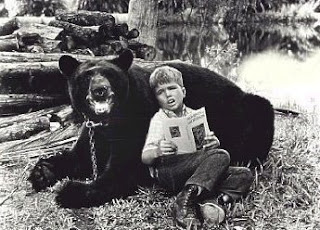 If you live in New Jersey, it's highly likely that the last words you hear will be "Tony sent me." Meaning no disrespect, but we all thought we'd at least be safe in Minnesota or Utah, and recent events would indicate otherwise. Speaking of eaten by a bear in Alaska. . . . Can you believe this illustration? What are people doing in those god-forsaken places? "Bear-Human Conflicts." Does anyone but me see the real issue here? If bears and humans have contact, it's a sure bet there will also be conflict. Gentle Ben was just biding his time, people, before eating little Clint Howard. Let the bears have Alaska!!!

eRumor reports that they received photographs of a bear killed by an airman stationed at Elmendorf AFB. The bear was 12 feet, six inches long and weighed an estimated 1600 pounds. (And who says size doesn't matter?!!!) Supposedly, the bear was responsible for several human deaths and the website even received photographs reported to be the remains of folks attacked by the bear. Uggghhhh. I didn't look at those.

A few blogs ago, I reported on folks with the names of famous folks like Frank or Jesse. They pop up every day and I can't share them all, but honestly, this one takes the cake. Like the guy didn't have enough names already, they had to get Jesse James into the equation. and Dillinger? How did this guy's parents expect him to turn out! And, he's not from the South. From the Kennebec (Maine) Journal and Morning Sentinel:
AUGUSTA -- A Winslow man was ordered to spend a year in jail after he admitted committing several driving offenses in Augusta.

Dillanger Lee Jesse James Smart, 26, pleaded guilty Monday in Kennebec County Superior Court to eluding an officer, driving to endanger, failure to stop for an officer and operating without a license. The offenses occurred Aug. 27, 2006, in Augusta.

My friend Nancy Lindsay, editor of The Enterprise, took this photo of quilts fluttering in the wind back in Patrick County, Virginia. Makes me homesick.

Thanks for the chuckle. This made me laugh. I moved to Alaska from Virginia last year, but I was born here. I guess that means I came home? Anyway, don't believe all you hear about bears eating people in Alaska. You are more likely to be killed in an altercation with a moose than with an "altercation" with a bear. Most "altercations" are nothing more than sightings, someone seeing a bear in their driveway, or eating out of a trash can. Bear attacks are uncommon, as bears mostly avoid locations where humans are, and we try to make noise in THEIR backyards (which is every hiking, biking, and woodland trail). Well, most bears avoid humans anyway. Up north in Alaska, above the Arctic Circle, where roads are non existant, Polar Bears do hunt anything and everything, including humans. However, if a bear had killed "several" people, including a man at Elmendorf, we would have heard about it. Alaska is a wonderful, amazing place... in fact, I sometimes wonder if we don't spin those "bear eating human" tales ourselves here, just to keep people from the Lower 48 from invading! No worries... if you ever visit, I can guarantee there's little chance of you even seeing a bear, let alone being eaten by one.