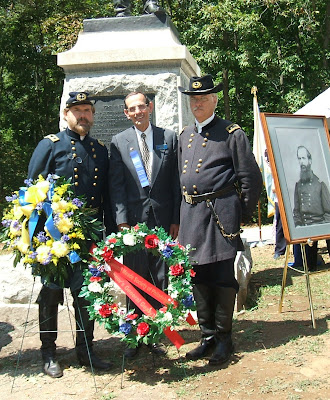 John Geary had a colorful career, the low point of which occurred in the Kansas Territory. As one of many ill-fated politicians in the position of governor, Geary found the situation impossible and sneaked out in the middle of the night. He went on to greater glory in the Civil War and as governor of his homestate of Pennsylvania.

In 1915, a monument honoring Geary was erected at Culp's Hill on the Gettysburg Battlefield. For some reason though, the good folks never got around to dedicating said monument. That was remedied a few days ago when some of our friends came together to honor Geary. Pete Romeika of the Meade Society furnished the photo (above) of the event. Pictured left to right, Andy Waskie, president of the Meade Society; ceremony organizer Sheldon Munn, prez of the Harriburg CWRT; and Jerry McCormick of the Meade Society who portrays Gen. A. A. Humphreys. At far right is a portrait of Gen. Geary.

I have mixed feelings about this ceremony. You see, my great-grandfather, Isaac Henry Bowman, was captured at Culp's Hill and spent the rest of the war in prison, first at Fort Delaware, then Point Lookout. I'm not real sure how happy he would be that I'm saluting General Geary. . . . Oh well. I guess we're all one happy nation now. Ha! 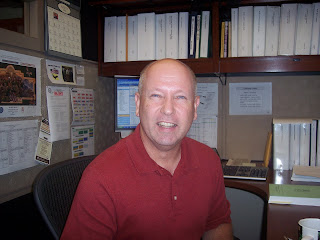 Visited the post at Leavenworth Monday and dropped in on my friends at the Command and General Staff College. They have happily settled into their new digs in Lewis and Clark Hall, having abandoned Bell Hall to the wrecking ball. I can't blame them for their enthusiasm over the move. Bell Hall, while historic for the people who have passed through, was a lousy piece of architecture. It did not serve well its purpose nor did it suit the lofty mission of this organization. There were coat hangers to keep the windows closed, the AC and heat never worked--it was a dingy and dull space. 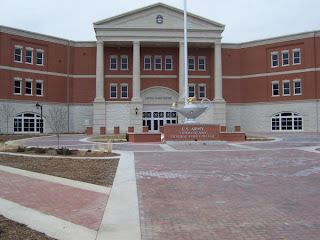 Lewis and Clark (below), on the other hand, is grand in scale and presentation. Tom and I led a tour to the old building a few weeks ago, and on September 9 we take folks to the new home of CGSC. Our tour guide will be our friend LTC (ret.) Ed Kennedy (above, left). Ed is a fastidious historian and a fun guy. Can't wait for this trip. We may have some other folks join us along the way as well.

We have some great ones coming up and will try to keep you informed. We have set up a new website, http://historygypsies.com/, just for tour information. Tune in and enjoy!
Posted by Deb Goodrich at 4:53 PM