I often think of the short lives that are analyzed into perpetuity. Jeb Stuart, Stonewall Jackson, Jesse James, Princess Diana -- all died before the age of 40, and yet the search for the details of their lives goes on. Using Diana (below, right) as an example, she only died ten years ago and yet separating fact from fiction is not an easy job. How much more difficult to find the truth of lives decades gone. Take, for example, William Clarke Quantrill. 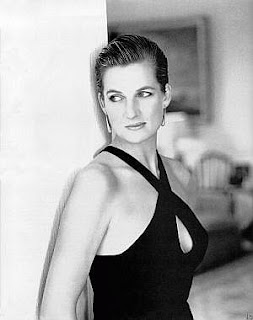 It is August in Kansas and Quantrill dominates this month's history. It was August, 1863, that Quantrill led one of the most daring raids of the American Civil War. What he accomplished, militarily, is difficult to comprehend. He led, led, more than 400 guerrillas, guerrillas, in nearly perfect discipline and order for five days, into the heart of enemy territory with a maximum destruction and a minimal loss of men. It is astounding.
What he accomplished, in human terms, is also difficult to comprehend. At least 150 men were slaughtered. And slaughter is the most accurate word for it. They were shot -- begging for their lives, dying in the dirt, some still in their nightclothes. A community was put to the torch. And yet sadly, this was not the only atrocity of the war, nor were heinous acts confined to one side. By the end of the Civil War, there was little moral high ground on either side of the Kansas/Missouri border.
Quantrill was killed at the end of the war. He was not yet 28 years old. In that short time he left a legacy to be debated, denounced, debunked. But he left no direct descendants that we know of (though one comes out of the bushes every now and then). How then do we piece together who Quantrill really was?

There is no daily diary of insurgency on the border; he wrote a few letters to friends and family. Most of what we rely upon are the words of others, those that knew him and those who wished they had never heard of him. There are no real objective observers. We have record of his deeds, but simply knowing what he did without understanding why doesn't give us the whole person either. What we, as historians, have to be very careful of, is speculating. When our grandmothers admonished us not to speak ill of the dead, they were teaching us a valuable lesson. The dead can't speak for themselves. For some folks, that just makes them easy targets.
Abraham Lincoln's biographers have hit the same snags, though folks are apt to remember him more kindly than Quantrill. But if you asked Lincoln's neighbors for their descriptions of his behavior, his marriage, his children, or his ability before he was elected to Congress, before he was elected president, or after he was assassinated, you'd likely get three very different perspectives.
When some of Quantrill's old neighbors remarked on his cruelty to animals as a child, they were speaking from the perspective of Civil War headlines that proclaimed, "Quantrill the Fiend!" Had he not distinguished himself during the war, would his old neighbors have even remembered the fair-haired boy from Canal Dover, Ohio?
Perusing the web the other night, I came across this website: //www.spartacus.schoolnet.co.uk/WWquantrill.htm. Since it is an educational resource, I was especially interested in their presentation. After reading it, I immediately contacted Chuck Rabas, expert-in-residence on Quantrill, Bill Anderson, the Jameses, and any number of other subjects. In the tradition of righteous indignation set by John Newman Edwards, Chuck responded, "When someone makes that much of an ass of himself, it should be pointed out as succinctly as possible."
That, or shot down like a dog.
The lesson here, dear reader: Do not believe half of what you read, see, hear or repeat, and speak kindly of the dead.

We were saddened to read of the death of a fine historian and gentleman, Phillip Shaw Paludan, one of the nation’s foremost authorities on Abraham Lincoln and the Civil War and historian at the University of Illinois at Springfield. Paludan died Wednesday after struggling with a long illness. He had won many awards for his scholarship on Lincoln and the Civil War, including the prestigious Lincoln Prize, awarded by the Lincoln and Soldiers Institute at Gettysburg College, for his 1994 book The Presidency of Abraham Lincoln. 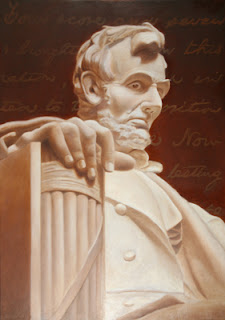 Topeka is the place to be on First Friday evenings. Located conveniently near the Westboro Mart, we are walking distance from several fine art galleries. The really outstanding exhibit Friday night was "Paint the Parks," the juried competition of artists depicting the national parks, historic sites, and battlegrounds. This is an incredible exhibit. We are so fortunate that Rod Seel is hosting one of the stops here in Topeka at his gallery, Westboro Fine Arts. If you can't make it by, view online at www.paintamerica.org. For an interview with Rod in the Metronews, click on http://www.topekametronews.com/index.html.

Here are two of my favorites, Civil War Reenactment, done at Fort Scott NHS, by Sun Bauer (below) and In His Own Words by Todd A. Channer (left). The photo does not do this painting justice; truly, it stops you in your tracks. The original is still available, but if that isn't in your price range, prints are sold as well. Personally, I think this would be perfect in the library of Judge Frank Williams. 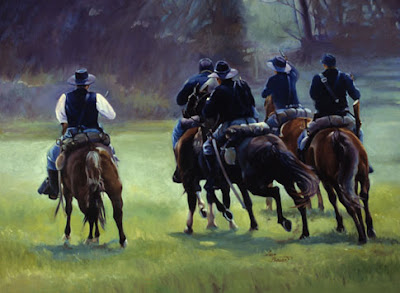