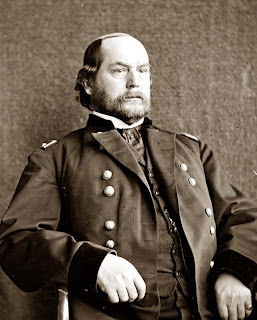 
Never heard of Rufus Ingalls? Neither had I until we met Pat Fairbairn. Chagrined at the neglect of this important Civil War figure, and drawn to the career of this logistics mastermind, Pat tells the important story of this underappreciated “behind the scenes” hero in the first person. According to Pat, "the Army Of The Potomac commanders would come and go, but Ingalls went on forever, keeping his position through all the changes in high command, and exercising his responsibilities with astonishing energy, resourcefulness, honesty, and extraordinary competence."

Extraordinary Competence? That was sure in short supply. . . just ask Mr. Lincoln.

On August 24, Pat will take the unsung general's story to Ingalls's hometown of Denmark, Maine. "An Evening With Rufus Ingalls" begins at 7:00 pm, at the Denmark Center For The Performing Arts, and is sponsored by the Denmark Historical Society. Pat illuminates some of the challenges of the quarter-mastering trade; shares his experiences with, and views about George McClellan and Ulysses S. Grant; and details the building of the giant Federal Supply Depot at City Point, Va., in June 1864. The supply depot played a crucial role in winning the Siege of Petersburg and defeating Robert E. Lee’s Army of Northern Virginia. Pat adds that the important role of City Point in the Siege of Petersburg is a story rarely mentioned in the volumes of books about the Civil War and much overlooked by historians.

And while you are in Maine, stop by Denmark’s newest restaurant, the “Back Burner," and order up their newest mixed drink, a “Rufus Ingalls!"

Great blog on Colorful Kansas. Yes, in the infinite wisdom of our delegates to the 1859 Wyandotte State Constitutional Convention, these Kansas Republicans decided to lop off 250 miles of our western territory and bestow upon Colorado Territory our mountains, gold and silver, beer and Broncos. One second thought not having the Donkeys is a good thing! To be fair, I suppose these men thought it would take multiple generations, if ever, to settle the area between Ft. Riley and Denver. In hindsight, I'm sure most lived long enough to rue their folly as railroads and homesteading quickly spread out on the High Plains following the war. Our Rocky Mountain legacy, however, survives. Denver City bears the name of Kansas Territorial Governor James Denver. A village founded, platted and named by a group of Lecomptonite goldseekers. Keep up your great history website.

DG--Thanks so much for the support, Tim. Visit Mr. Rues at Constitution Hall in Tom's hometown of Lecompton, Kansas, and learn more at http://www.lecomptonkansas.com/.
Posted by Deb Goodrich at 8:49 AM