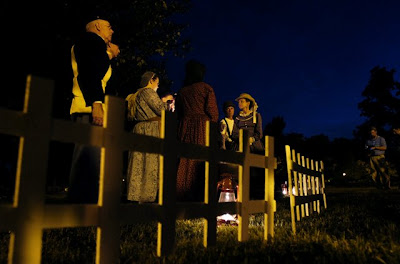 There was a candlelight vigil in Lawrence Tuesday night, held for the victims of Quantrill's raid on the town in 1863. At least 150 men, and perhaps as many as 200, lost their lives and the town was left in ashes. The townsfolk left found the will to persevere and to rebuild the town and their lives. We weren't able to attend because we were busy rebuilding--the bathroom, the basement, the backyard. Just as its man's nature to destroy, it's human nature to build. Yesterday morning, I was holding a board as Tom sawed it, and the sweet smell of pine was released into the air. The two best smells on earth are a freshly sawed board and newly turned ground.
(Photo above from the Lawrence Journal World)
____________________________________
Being Betty 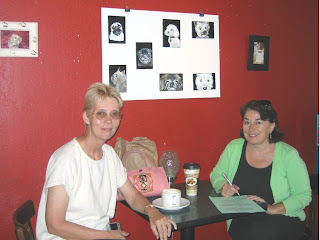 Our neighbor Betty Wright (far left, with me on the right) is an attorney by training but has so many other talents that are coming to light! She was taking care of our Pekingese, Pepper, while we were traveling a while back and she snapped a photograph from which she painted his portrait. It is on display at Lola's Coffee Shop, 10th and Gage, along with Betty's portraits of the other dogs who reside on Collins Park. In addition to her artwork, Betty has started a concrete resurfacing business. Sidewalk by sidewalk she is beautifying our fair city. We're so lucky to have such a talented and generous neighbor. Her sister-in-law, Betty, sent me the photo. Our doggie is in the middle of the bottom row, if you're interested! Her exhibit is on display through the end of August.
Posted by Deb Goodrich at 8:56 AM