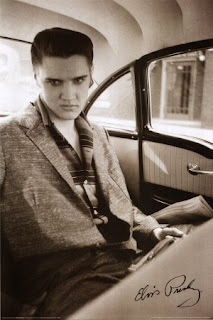 It has been an emotional week; my daughter and grand-daughter were visiting from North Carolina and the house was taken over by an almost-four-year-old. I got them to the airport at 5 on Thursday evening only to find that their flight was delayed until 8 p.m. My daughter was sick and poor little Lulu was so eaten up with mosquito bites that we had to take her to the doctor for a prescription of Prednisone. It was good to see them, but they weren't feeling well most of the time. I think they were on the upswing when they left, though. Tom & I took Lulu to the park Thursday morning just as the weather cleared and the humidity left and it was a sublime time on the mini-train and the carousel--a day when all is right with the world.
My daughter is 30 today. While she was being born, the doctor and nurses were still talking about Elvis Presley who had died just days before.

Yesterday, my sister called to say my cousin, Phillip (right), who just turned 27 in May, was violently murdered in Macon, Georgia. He was stabbed in the head and face and his throat was cut. He was at home, the basement apartment of a house in a not-so-great part of town. With the internet, I could watch the news and view the scene. As he was dying, he stumbled out his door, and up to the front porch of the house, then fell in the bushes and died. His blood is smeared on the white porch posts.

Until now, Macon has been a place in history for me, the place where Jefferson and Varina Davis were taken after his capture, where they were hooted and jeered and packed off for God-knows-what fate. The image of the crowds gathering around them to catch a glimpse of the fallen leader is burned in my brain. Now there are the blood-stained images of Macon that are part of my history.
I have not seen him for a long time. His sister and I are still close, but Phillip, who was 8 or 9 when his Mom died, went to live with a brother, went into the Navy, went searching for a place he could belong and find some peace inside himself.
I hope his has it now.

Whatever illness my daughter had while she was here, I have caught. Coughing, fever, stuffiness, general malaise. It is a beautiful weekend, the Powwow is going on at Lake Shawnee, and I had hoped to visit with my friend, Mona.

We shall wait and see what the day brings.
Posted by Deb Goodrich at 11:18 AM