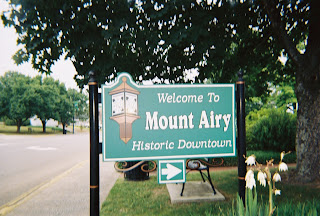 My sister called this morning. She was on her way to Diana's Restaurant in Bannertown. For those unfamiliar with North Carolina geography, Bannertown is a "suburb" of Mount Airy, hometown of Andy Griffith. Diana's was packed. Seems Mayberry Days is in full swing and the tourists are flocking to this burg in northwestern Carolina. Snapping pictures of Snappy Lunch and Floyd's Barber Shop. The welcome out-of-towners bring some much needed cash into the area. Mount Airy is the very western edge of the Piedmont, formerly the textile capital of the world. Since every thing has gone overseas, the factories sit empty, grass growing in the parking lots. I can remember when quitting time meant hundreds of people pouring forth like cattle. Many of the farmers in the area had wives that worked in the mills and they would take them back and forth--"Go-get-hers" the farmers were called.

Socks, sweaters, baby clothes--Mount Airy's mills made them all. Since NAFTA, they're almost all gone. In August, Gildan Manufacturing closed its two remaining sock plants and put 520 people out of work. It is the single largest manufacturing loss in 20 years.

This year alone, Mount Airy has now been hit with a total of five plant closings. An estimated 1,047 jobs will be gone by the fall at Gildan, Renfro, Cross Creek, and Spencer’s Infants and Children’s Wear. Most of those jobs will be moved overseas.

My sister is a bookkeeper, and the number of bankruptcies she's seen over the past couple of years have gone beyond skyrocketing. So dear readers, go to Mayberry and spend some money! You'll be supporting one of my cousins. 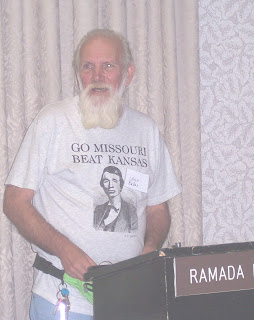 My friend Terry Hobbs rode with me to St. Jo Mo on Thursday night to hear our bud Chuck Rabas (right) speak. It was a great talk on a sub-gang of outlaws that was called upon by Jesse from time to time. Lots of interesting folks, including relatives of the Jameses and the Youngers, and good research. Keep watching the blogs and we'll pass along some of the newly discovered facts. In case you can't quite make out Chuck's T-shirt, it has a photo of William Clarke Quantrill and says, "Go Missouri, Beat Kansas."