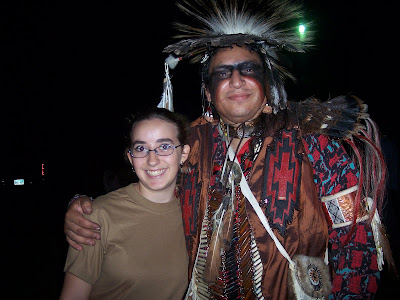 Noel and I went to the Powwow last night. It is a strange and beautiful event. The photo above is Noel with Tom, a Delaware who lives in Lawrence. I have to tell you, when he isn't smiling, he's pretty scary in this costume. He had a vendor's tent where he was selling real four-leaf clovers. 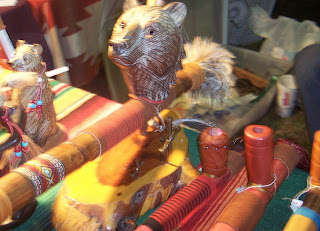 At another tent, I visited with Paul White Bear, a Cherokee who carves pipes in the tradition his grandfather taught him. Paul doesn't sound like an Indian (whatever we imagine that to be). He lived in upstate New York and has that accent. "I was a cop in New York," he said smiling, "NYPD. A helicopter pilot in Viet Nam. Yep, I've seen it all."
His pipes (right) were magnificent, and reasonably priced. He wants people to own them and use them. Prices began around $40 and went over a hundred depending on the elaborate carving. He is a member of the Bear Clan, so that animal is a favorite subject. Since retiring, Paul and his wife do the Powwow circuit. She enjoys the dancing; he keeps carving. Below, Paul with a pipe he had just finished. 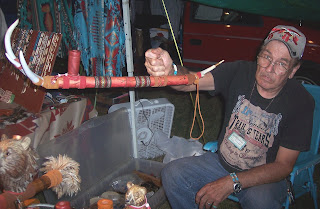 He doesn't sell online, but I have his address so email me if you're interested in contacting Paul to purchase a pipe.

The best part of the Powwow, actually, was the leaving, when we were walking to the car in the dark. The stars were clearly visible over Lake Shawnee and the beating of drums and and ancient chants of the Plains Tribes drifted through the trees. I wanted to lay down a blanket and sleep on the grass. 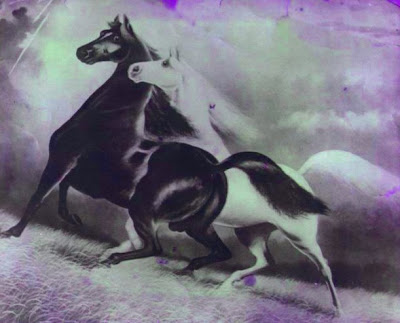 We grew up on top of a hill in the Blue Ridge Mountains. One night, the moon was bright, the clouds were twisting and changing, and I convinced my sister to drag a couple of army cots into the yard so we could enjoy the sight. I couldn't sleep. It was a sky we see now in movies like the Chronicles of Narnia or Harry Potter, a creation of special effects wizards; the moon was bright, so that nothing was black, just various hues of blue. The clouds were so unruly and changing that it was as if a herd of ghostly stallions were stomping and snorting in the heavens. We gave up after an hour or so and went back inside to get some sleep. 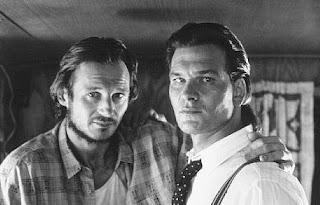 While trying to get up enough energy to go to the Powwow, I was flipping channels and came across the movie, Next of Kin. Starring Patrick Swayze and Helen Hunt, and Liam Neeson long before he was box office gold, not to mention Bill Paxton before Tombstone, this film pits the mob against hillbillies. And guess what? It comes to a draw. This is when I fell in love with Liam Neeson (far left, with Patrick Swayze). The Irishman made such a convincing boy from the hills (his name was Briar Gates; I think I have a cousin named Briar Gates). The scenes shot in the mountains are outstanding; the people are real. Liam Neeson is so genuine and powerful in this role. Michael J. Pollard is the clerk in the sleazy Chicago hotel. Everyone is believable. From surfing the web, I find the movie has a cult following of folks who feel exactly as I do.

Some of you may know that Liam is soon to be portraying President Lincoln and while researching the role he visited our friend, John Sellers, at the Library of congress. I was on the phone with John just minutes before the star arrived and asked John to tell Liam he has a fan with hillbilly roots. When John did so, Liam immediately lapsed into his hillbilly brogue and said he fell in love four times while filming in Kentucky. I only have one thing to say: If our cousins look this good, why wouldn't we date them?
___________________________________________
Free State of Patrick Update 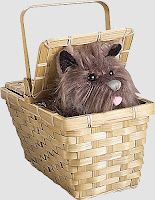 I spoke with the sheriff's department in Patrick County, Virginia, this morning and they still haven't caught the boa constrictor that is loose in Patrick Springs. (See Snake in the Grass, July 19 post.) Keep your little dog in the basket, Dorothy!
Posted by Deb Goodrich at 9:50 AM

Hallelujah to that one Deb! If I had a cousin that was as hot and had a voice like Liam Neeson or Russell Crowe (can't wait for 3:10 to Yuma to come out this weekend!) i'd want to date him!!!!!