From the Soap Box 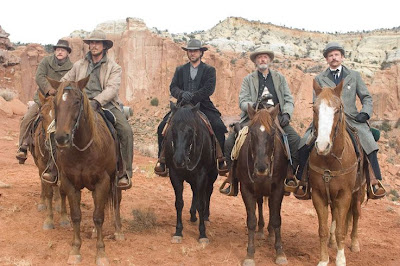 In Arizona in the late 1800's, infamous outlaw Ben Wade (Russell Crowe) and his vicious gang of thieves and murderers have plagued the Southern Railroad. When Wade is captured, Civil War veteran Dan Evans (Christian Bale), struggling to survive on his drought-plagued ranch, volunteers to deliver him alive to the 3:10 to Yuma, a train that will take the killer to trial. On the trail, Evans and Wade, each from very different worlds, begin to earn each other's respect. But with Wade's outfit on their trail – and dangers at every turn – the mission soon becomes a violent, impossible journey toward each man's destiny. . . . from the studio.

If you plan to see 3:10 to Yuma and want to be surprised, stop reading here. Everyone I know, however, was lined up opening night so I don't think many evenings will be spoiled. 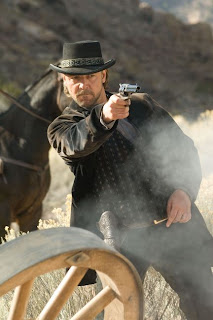 I've never been so angry at Russell Crowe.
Hardcore Western movie fans have been salivating over the opening of 3:10 to Yuma. (We were salivating over Jesse James, too, but our mouths have gone dry from waiting.) The 1957 version starring Van Heflin and Glenn Ford was excellent--well-done, suspenseful, and ultimately, optimistic. There are few rules in writing or movie making, in making art. But there is one, and it is unbreakable: when you give an object life, you have to step back and let it live. You step out of the way and let it twist and turn according to its will, not yours. Real art lives as do your children, independently. Shaped by you, perhaps, but ultimately independent.
So what happened at the end of the newest offering from Tinseltown? Elmore Leonard, who wrote the short story upon which the movies are based, attended the screening and commented, "Did you understand the ending? Because I sure didn't."
In fact, Leonard is quoted on his website as saying, "I didn’t understand why [Russell Crowe] shot his own men. Because he was all for them before. Why [did] he have the change of heart? I don’t think Bale was effective in what he was doing. You could feel sorry for him but why? Because every time Bale said “well I have this problem/I have that problem,” [Crowe] never sympathized with him ever….and then he shoots his own guys."
I'll tell you why he shot his own men. Because that's the mindset of Hollywood. It's all about body counts, and if you don't have any real ideas, just blow people away.

Who are these people we have given our culture over to? They don't think we can pay attention unless there is some sick, twisted, plot turn. They don't think we'll be satisfied to let characters do what they do. Even if we wanted Russell Crowe's character to shoot his own men, it doesn't follow with the rest of his actions, the foundation has not been laid. When he killed his own gang member earlier in the film, it was in context. It was cold-blooded, but it was in context. What happens at the end is the result of a writer that isn't confident in his own work and uses a body count to make up for it. 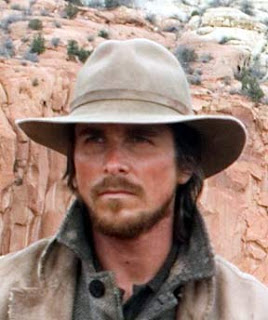 And why I am angry at Russell Crowe? He's the one person here with the artistic sensibility and clout to tell people that it doesn't work. And he just had a good time and let it go. In fact, I read an interview during which Crowe defends the ending and how appropriate it is. Russell, if you believe that drivel, you are not the man nor the actor I believed you were.

The movie works on so many levels, and that's what is so irritating. Christian Bale (right) was so good that I can't get his face out of my mind. "I've asked God to give me something but God ain't listening," to quote Bale's character. He encounters this outlaw who is everything that he isn't: brave, charismatic, and to some extent, even successful. But Bale's rancher has something that Crowe's outlaw doesn't have: someone to go home to, something to fight for. Each of them understands this and the relationship works.
What doesn't work is the ridiculous ending. I'll still invite Russell Crowe over for dinner next week, but I'm not getting out the good china.
Posted by Deb Goodrich at 9:06 AM