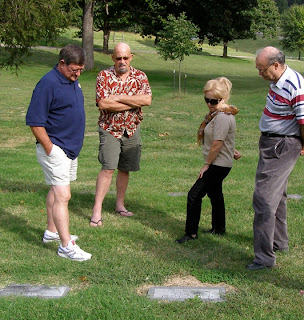 Michael Stubbs snapped this photo yesterday during our tour to Fort Leavenworth and environs. Paul Beck, Tom, Toni Beck, and Doug Wallace are gazing at the stones of two of Kansas most notorious murderers--Dick Hickock and Perry Smith, of In Cold Blood fame. They were executied April 14, 1965, and are buried in nearby Lansing.

I have mixed feelings about taking folks to this spot. When we were there on an earlier tour, the sextant joined us and commented that more people come to see these graves than all the others combined. It's ironic, isn't it? There is a major general and a flamboyant publisher resting in the same cemetery, and yet two low-life hoodlums get the most attention.

Yet, these are names everyone has heard. Not everyone knows Gen. James G. Blunt or D. R. Anthony, the brother of Susan B. and advocate for a freestate Kansas.

Toni commented that it doesn't seem right for these two men to be resting next to "decent" folks. Perhaps that is true.

I have been thinking a lot about right and wrong since my cousin was murdered. His family has been asked by the District Attorney if they want to pursue the death penalty. That is not an easy choice. A death penalty trial is an emotionally wrenching experience. The air in the courtroom is different when a life is at stake. Every word takes on added significance.

A boy I grew up with, a very close family friend, has been on death row for nearly 14 years. He committed two brutal murders. He probably deserves to die. Yet I know there is another side to him; I know he is someone who needed to get help for his issues a long time ago and no one understood that. I know he is not only a monster.

There is an Indian tribe, perhaps the Sioux, that believe the sacred stone from which pipes are made is striped with white and red representing the blood of the people--all the people--the victims and the victimizers, the innocent and the guilty. 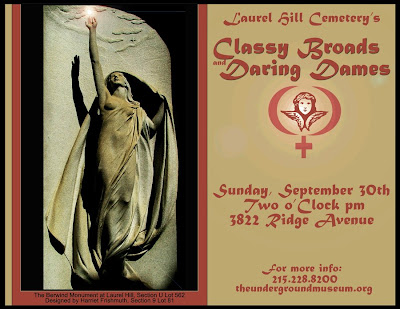 Good Evening Deb!
I was thinking of you today when I went for a walk thru one of the little burying grounds in what is now downtown Charleston, SC. Some of the burials date to the 1700's and have the most interesting and curious headstones. It made me think of our afternoon in the Topeka cemetery looking for the monuement to the Tornado victims and Cyrus K. Holliday!
Take care,
Michelle