Ode to the Pumpkin 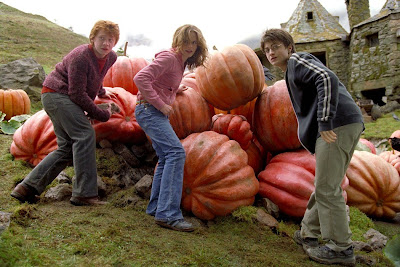 No fruit or vegetable captures the imagination like the pumpkin. Cinderella used it as a coach; Peter, Peter, Pumpkin Eater kept his wife inside its shell; Charlie Brown fell asleep awaiting the arrival of the Great one. It scares us, it entertains us, it feeds us. My favorite scene from all the Harry Potter movies is Hagrid's pumpkin patch (above). Aren't those pumpkins wonderful? Don't they conjure images of coaches and dwelling places for little beings? 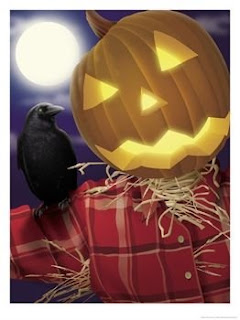 There is a wonderful mystery to a pumpkin.

Tom is whining that with autumn comes autumn food--fattening and irresistible. I made pumpkin soup last Sunday for company, and we have been savoring the leftovers ever since. Now comes the season for pumpkin pie, pumpkin bread, pumpkin ale, pumpkin truffle. . . oh my. Bryce Benedict grows hops and makes his own pumpkin ale which he generously shared a couple of years ago. It made the best cheddar ale soup I have ever tasted. The pumpkin flavor was just the extra touch to make it interesting.

Tradition
According to Pumpkin Patches and More, the tradition of carving a jack-o-lantern from the pumpkin began in Scotland and Ireland. (well, of course!) Except, they used turnips, pumpkins being native to the New World. Can you imagine homes decked out in turnips, or being scared to your stocking feet by a candle inside a turnip? Check out pumpkinpatchesandmore.org for the rest of the story.
And now, dear readers, I'm off to the pumpkin patch.
______________________________________
Bald Eagle Rendezvous 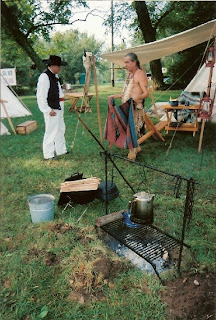 . . . is this weekend in Lecompton, Kansas. Situated above the Kansas River, the setting for this event could not be more beautiful. Mountain men, Indians, traders and trappers gather just as they would have in the 19th century. Today through Sunday.
By the way, we're still raising money for the historical marker honoring Tom to be placed on the corner where he grew up. Let me know if you'd like to contribute. Tom really has his heart set on neon flashing lights that read, "Childhood Home of Tom Goodrich, Renowned Historian and Hunk."
Posted by Deb Goodrich at 9:56 AM

Pass me the pumpkin bread please!

One famous pumpkin to add to your list: "Pumpkinhead" the horror film destined to become a cult classic!

You, Byron, obviously go see different movies than I do! Though I did think about "Nightmare Before Christmas," where "Jack" has a pumpkin for a head.