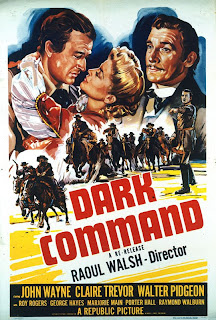 We end July on an interesting note. . . . Today is the birthday of "noted guerrilla" William Clarke Quantrill, a man whose name struck fear in the hearts of Kansans during the course of the Civil War. A mild-mannered school teacher turned killer, his raids into the state of Kansas were devastating, culminating, of course, with the Lawrence Massacre in August, 1863.

Quantrill is an enigma. Contrary to what many historians have reported, there is no epiphany evident to us that would demonstrate when this young Ohioan turned his sympathies toward the South. There are no murdered relatives to avenge, as is the case with the Youngers, the Andersons, or the Jameses. He tried to maintain discipline; as horrific as the Lawrence raid was, for example, the hundreds of guerrillas at his command had orders not to harm a woman or child. That order was followed, though women held their husbands as they were shot down and died in their arms.

Quantrill himself was shot by counter-guerrillas in Kentucky on May 10, 1865, and died about a month later. He has not rested well in death; in 1992, his remains were reinterred in the Confederate Cemetery in Higginsville, Missouri (funeral photo below).

Our friend Ken Spurgeon is producing a documentary based on Tom's first history, Bloody Dawn: The Story of the Lawrence Massacre. The shots of the massacre are incredible. In the meantime, watch Dark Command, which is historically horrible, but interesting, or Ride With the Devil, which has some pretty good footage.

From August 9-21, Lawrence, Kansas, puts its Civil War past to the forefront with movies, events, speakers, activities, and debates over the tactics along the Kansas/Missouri line. Visit their website to find out more: http://www.visitlawrence.com/visitor/history/civilwarhistory/civil_war_western_fr/

If you're really interested in learning more on this shadowy figure, visit the site of the Quantrill Society at http://www.geocities.com/quantrillsoc/index.html. These folks know everything about the guerrilla chieftan and will be happy to share their knowledge. Or, just buy one of Tom's books. That would really make me happy.
Posted by Deb Goodrich at 8:15 PM

Good Evening Deb!
I just watched Dark Command the other night, how funny you should have it here on your blog. I bought it for $5.99 in a used DVD bin at the local Hastings here in Bartlesville. You are right, historically TERRIBLE but talk about more fun than chasing a pen full of greased pigs! Hot dog! I think Santa Fe Trail and They Died With Their Boots on are in the same category-- historically horrid but fantastically great films with so much to entertain! Dark Command just can't go wrong with John Wayne!!!! Another film that is superb on many fronts is THE HORSE SOLDIERS with John Wayne and Constance Towers. Now that I have been to Vicksburg, MS and have seen the Southern rail line that Grierson's raider were attacking I understand the film better since that was their inspiration. WOW! I felt a little like Constance, riding all over Mississipi waging my own little war on the relentless bugs that attached themselves to my windshield.

This fall the remake of 3:10 to Yuma and the new Jesse James film look great...it is a great time to love westerns. All we need is a new Billy the Kid movie as we are all set!

have a good one!
Michelle

Yes, Dark Command is fun and I can't wait to see 3:10 to Yuma, or to buy the kickass poster that goes with it! Maybe they'll have that for $5.99 at Walmart.

Fascinating. I think a lot of outlaw/rebels tend to start in their ways because of some real social injustice, but then go somewhat overboard in their methods. For example Australia's most famous, Ned Kelly, probably had suffered - and watched others suffer - harsh treatment by the young colonial government, but that doesn't really justify murdering police in cold blood in the manner in which he did. Perhaps similar considerations apply for Quantrill.

I have so enjoyed browsing your blog. I came here via a search for James Best after I saw him in an episode of "Wanted Dead or Alive." I never watched the "Dukes of Hazard,' and didn't even know he had been in it. What a come-down such silliness must have been after his many, more dignified parts.