Rebels at the Gates 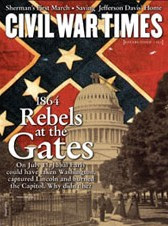 Great issue of Civil War Times on the newsstand! We are in the midst of the anniversary of Jubal Early's assault on Washington, D. C., something our friend Dave Finch has devoted his life to studying. We met Dave several years ago at an impressive reenactment of the Battle of Monocacy, the event that saved the Union capital. (I joked that it seemed strange to me that folks should celebrate saving D.C. and apparently the Yankees surrounding me did not find the comment humorous. I grew up in a land where Jubal Early IV was the family doctor for lots of folks, so it's just better for your health to root for Early!)

The reenactment is also where we met Julia Robb, a reporter who has moved back to her homestate of Texas. She has a fascinating article appearing soon on the death masks of famous outlaws. See Tom's blog today for more details.

Another very interesting story in the current issue of CWTI is that of a couple of Confederate soldiers who were executed after the surrender at Appomattox. Of course, a memorial marks the spot and like many of the events of the Civil War, the action remains controversial. As usual, the magazine is full of good stuff. Don't miss this one.

So saddened to hear of the death of cartoonist Doug Marlette. (http://news.aol.com/story/_a/cartoonist-doug-marlette-dies-in-crash/20070710164709990001) When I was a young reporter in Mount Airy, North Carolina, part of my job was to scan the Charlotte Observer for news each day. Before the headlines, I turned to the comics to read "Kudzu," and the latest antics of the Reverend Will B. Dunn. The name still cracks me up!

Just in case you can't make out the captions below:

Holy Catfish! I got hit with another technical in church league basketball!
The refs are discriminating against us Protestants!
If the Catholics can make the sign of the cross before each free throw. . .
I don't see why I can't handle snakes!

Marlette was only 57. His loss leaves an incredible void, but his life brought so much joy. Is God gonna have a good time when this rebel knocks at the Pearly Gates! 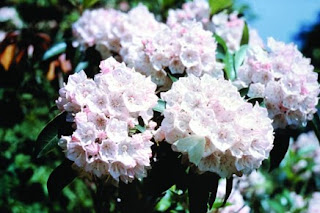 Our buddy Rob Hodge is officially moving from Virginia to Kansas City. Spoke with him and his more significant other, Hibah, on the phone yesterday, just as they had packed up the last of their possessions. It is an emotional move. Even though Rob grew up in Ohio (not far from "Monocacy Dave" Finch, coincidentally), his spiritual home has always been Virginia. Likewise, Hibah has only lived in that part of the world. Just to make them feel better, I began listing the things they would miss. . . mountain laurel (left), fall color, cornmeal, oysters, the Blue Ridge Parkway, bluegrass, etc, etc. We plan to start a support group for displaced Virginians. Anyone interested in participating, just buy the bourbon and we'll be there!
Posted by Deb Goodrich at 10:29 PM